Hicks follows trail to U. of Rio Grande 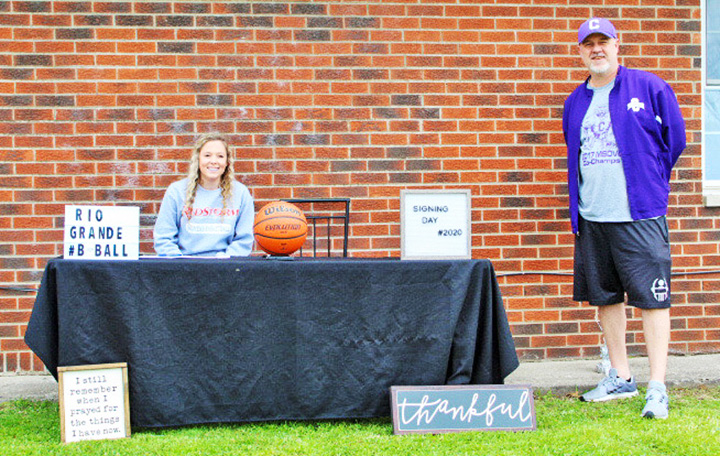 CHESAPEAKE — There’s a couple of lines in the song “Tracks of My Tears” that fit the basketball career of Taylor Hicks.
“If you look closer it’s easy to trace
The tracks of my tears.”
It doesn’t matter if you know the version by Smokey Robinson and the Miracles, Johnny Rivers or Linda Ronstadt, it’s the version by Hicks that matters.
Hicks began playing basketball when she was 5-years old, but she admitted that she cried the entire time.
“My coaches had to pull me out on the court,” she said with a laugh.
But Hicks returned to play the game when she once began middle school and she is happy she didn’t abandon the sport after signing to play for the Rio Grande University RedStorm.
“When I got to high school I thought about it, but I never through it would happen. It kind of came as a surprise,” said Hicks.
The Chesapeake Lady Panthers’ 5-foot-4 senior guard said the offer to play was unexpected.
An impressive game on senior night caught the eye of Rio Grande. Hicks scored 11 points that included three 3-point goals.
Head coach Dave Smalley and assistant coaches Brooke Marcum and Brandon Bias all reached out to Hicks and expressed their need for a shooting guard.
“I went on a visit to see the school and met all the people and coaches and I knew that’s where I wanted to go the next four years,” said Hicks.
Chesapeake head coach Chris Ball thinks will be an asset to the Rio Grande program.
“She plays hard. She has the ability to shoot and with a lot of work and maturity in their program, she’ll improve,” said Ball.
“I’m very proud of Taylor making it to the next level. She’s a hard worker, an extremely fierce competitor, she also benefits from strong support from her parents Shawn and Jess. I think that family support she has and her competitiveness will help her to excel at Rio.”
Besides basketball, Hicks has also played track and soccer while also being a cheerleader.
But now basketball is her favorite sport and Hicks said her family, friends and coaches have all been instrumental in her career.
“I just love the game and I just love being part of a team and I love how everybody has a connection to each other. I just love it,” said Hicks.
Hicks said Rio Grande plans to start her on the junior varsity team and see how she develops.
“I’d like to work my way up to varsity and just continue to grow as a player,” said Hicks. “Hopefully by my junior year I’ll be on the varsity.”
Hicks said she plans to major in elementary education with plans to coach. She said Ball was a factor in her decision about the future.
“He had a little influence in this,” said Hicks.