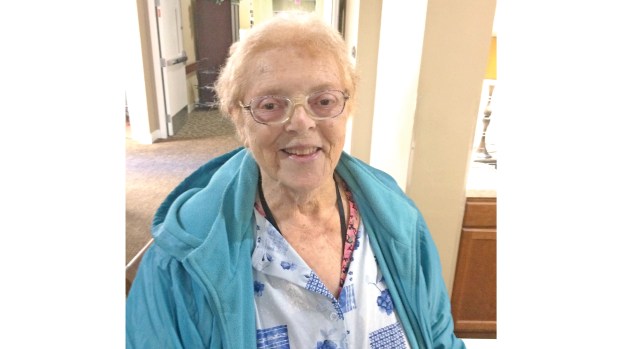 Gladys “Red” Kerstetter, of Pennsylvania, is new resident at the Wyngate at RiversEdge, moving into the facility in November 2019. (Submitted photo)

GENERATIONS: Getting to know new faces

ROME TOWNSHIP — Gladys “Red” Kerstetter is originally from Pennsylvania and came to Huntington at the urging of her family.

“My kids didn’t like me living alone and they were down here,” she said.

She said her children chose the Wyngate at RiversEdge so that she could be near them.

“I came after my kids picked it out,” she said.

A recent arrival, she moved in back in November and said she has been involved in the community and enjoys the activities at the facility.

“I take part in all I can,” she said, citing the Bible study as a favorite.

She said she likes to knit and crochet to stay occupied as well.

The daughter of Ann Erneste Wheeler and Richard Mullen, she lived in Columbia, Pennsylvania before the move.

She said she traveled a lot, as her husband Richard was in the Air Force.

Together, they had three sons, Bob, Bill and Roger and she has nine grandchildren.

After her children grew up and went to college, she took a job in a nursing home, working in the cafeteria.

She said she is happy in her new location.

“And my son lives just up the road,” she said.

She said she has enjoyed all the personalities she has met in the senior community, making many new friends.

“Everyone’s really nice,” she said. “And I like everybody here.”