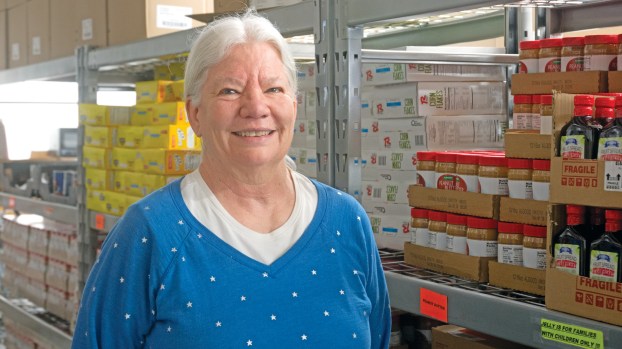 GENERATIONS: No slow down in retirement — Terkhorn is a substitute teacher, food pantry volunteer and more

For someone who is retired, Lois Terkhorn is very busy.

She is a substitute teacher, she runs Nancy’s Nook thrift store, is involved in scouting and she is a volunteer at the Harvest For the Hungry food pantry. In fact, the thrift store is used to support the food pantry and Terkhorn is kind of famous in the community for wearing a pig costume at many of Harvest’s events such as their annual silent auction and a fall festival.

Many people remember her as a teacher.

She retired from Burlington Elementary School in June 2015 after, as her retirement papers said, 38.65 years. Although being retired didn’t really stop her from working in the schools.

“By September, I was tutoring here in Ironton, two days a week,” Terkhorn said. “I was there for a couple of years and then they had cuts in their funding and the tutoring positions were cut.”

So, she started being a substitute teacher.

“Subbing isn’t what I thought I really wanted to do. I thought I would go back and volunteer,” she said. “This is my third year of being a substitute teacher at Burlington. Before the coronavirus hit, I was subbing almost every day and I really enjoyed it.”

One of her most popular events she helped with at Burlington was Vehicle Day. Terkhorn started helping because it involved a lot of calls to a lot of people to get the event set up and as a substitute teacher, she had more time that than the full-time staff.

“We bring in, usually, some 50 different vehicles for the kids to see,” Terkhorn said. “We bring in everything — buses, helicopters, fire trucks. We were supposed to have it this year, but we hadn’t really started on it yet and obviously, now we aren’t going to have it. Right now, I really miss the kids at school. It’s different not being around kids all day.”

Nancy’s Nook started up in November 2016. The shop was originally on Park Avenue in Ironton but moved to its current location off of Rotary Fountain plaza on Third and Center streets.

“The idea was, I had been working with Harvest For The Hungry for quite some time, and we wanted to open something like this to support the pantry, as a different way to raise money and awareness for the pantry,” Terkhorn said.

The original stock for the store came from a friend who moved in with her son. They had an estate sale and what didn’t sell was used to stock the shelves of Nancy’s Nook.

Since then, they have accepted donations from the public and have “a little bit of everything.

“I tell people we have everything from shoes to antiques,” Terkhorn said. “We have had a lot of donors since we opened the shop and have a lot of wonderful things.”

She said they haven’t raised a lot of money in because they have to pay rent, electric and insurance, but “it has brought a lot of awareness. Occasionally, someone will bring in a donation for the pantry and if we weren’t here, they wouldn’t be able to do that.”

Terkhorn also picks up items for the pantry at Pick ‘n Save and of course, is the pig at their events.

“When we had the drive-thru pick up a couple of weeks ago, I was in the pig costume directing traffic,” she said.

She also gets in contact with celebrities to get items for the pantry’s annual fundraising dinner in the fall.

“I’ll ask, I figure the worst they can say is no,” Terkhorn said, with a laugh.

On top of teaching and volunteering, Terkhorn also works with the Cub Scouts and the Boy Scouts Pack and Troop 6104 at the First United Methodist Church in Ironton.

“I have three sons and they are all Eagle Scouts and I just kept working with them,” she said.

She is looking forward to being on staff at the scout’s National Jamboree next summer.

“I’ve been on staff at three different ones,” Terkhorn said.

She is also active in Eastern Star and is finishing up her third year as their grand representative to Bolivia.

And at her church, First Methodist Church, she helps with the youth. She also belongs to American Association of University Women and to the Retired Teachers of Lawrence County.

Is there anything she has joined that she’s quit?

“Probably not,” she said, with a laugh.

And why does she stay so busy?

“They say it keeps you young, so I thought I would try that,” Terkhorn said.

It’s also a bit of a family tradition. Her father didn’t retire from full-time work until he was 85.