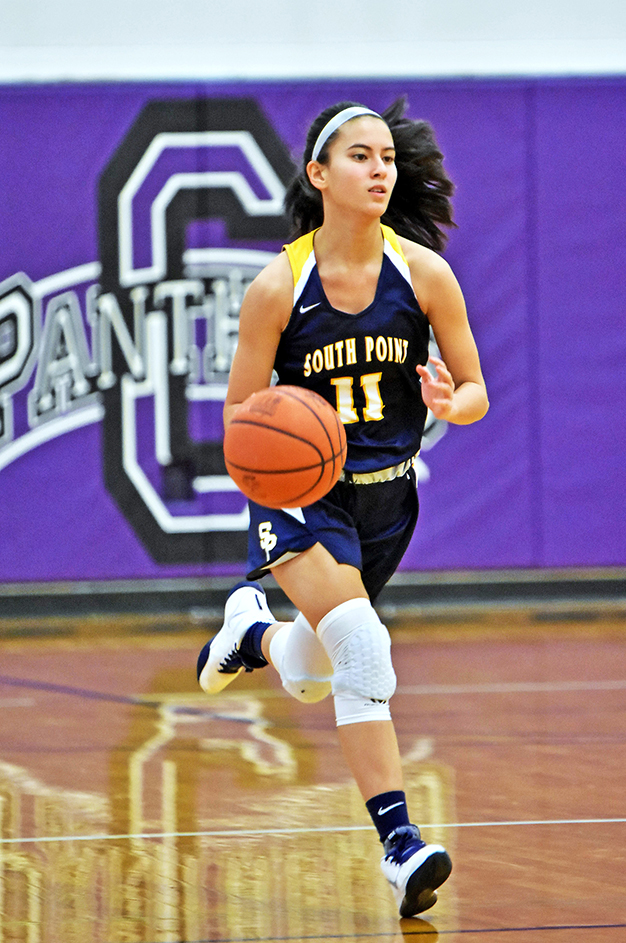 SOUTH POINT — A jewelry hunt for an emerald uncovered a ruby.
South Point Lady Pointers’ senior point guard Maddy Khounlavong was just trying to play her usual game, unaware that that performance was about to change her future.
“Last year, I was recruited by Capital (University) but I was really set on not playing college basketball so I told them no. But then coach (Ross Tonyan) just happened to come to one of my games to recruit somebody else and ended up talking to me after the game,” said Khounlavong.
“I went and visited and just decided by that (visit) that I wanted to play.”
The 5-foot-6 Khounlavong completed the sale as she signed a letter-of-intent to play for the Miami University-Hamilton Harriers.
Tonyan is excited that Khounlavong is joining the program.
“She is the perfect fit for our offense and the way we play,” said Tonyan.
“Her high IQ is a big reason why we started recruiting her. We know she is going to come in and do some really great things for us and be a strong leader in our program over the next four years.”
Khounlavong said she knows what Tonyan and the program need from her and she is ready to fit the bill.
“They said they need somebody who can control the game and hopefully that’s me,” said Khounlavong.
“When I talked to the (Tonyan) it looks like I’ll be starting at point guard because everybody else on the team are scorers or big. They want me to control the game and keep the speed the right way and pass the ball. And they have that slot open.”
Although Khounlavong is a pass first, shoot second player, she has a good shot and she may change her attitude later in her career.
“They said they would help me develop my scoring if I want to and if I have an open shot to take it. But they want to work on my confidence,” said Khounlavong.
Before she ever starts to think about adding more offense to her game, she said the adjustment to the next level is her greatest concern.
“It’s definitely a lot faster and with the shot clock it’s very different. It speeds the game up,” said Khounlavong. “It’s more physical for sure. I have to get stronger. I’m excited.”
Khounlavong has played basketball since kindergarten.
“My whole family played basketball. It was mainly my dad who put me into it and helped me work on it all the time and got me into AAU and with extra practices,” she said.
Besides basketball, Khounlavong played volleyball and ran track in middle school.
“I like the physicality of it and I like that you have to work really hard to be good at it. And I really like my team. I’ve played with the same people for 11 years or so. They make it enjoyable,” said Khounlavong.
The Harriers are members of the Ohio Regional Campus Conference along with Ohio University in Chillicothe, Lancaster, Zanesville and Eastern, Wayne College, Ohio State Lima and Mansfield as well as Miami University Middletown.
Khounlavong is trying to decide between chemistry or get her bachelor of science.