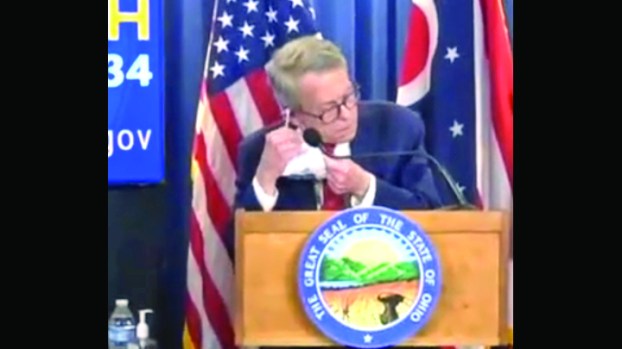 Ohio Gov. Mike DeWine removes his protective facemask at the start of his news conference in Columbus on Monday. (Screengrab)

COLUMBUS — Ohio Gov. Mike DeWine said on Tuesday that masks will not be required for customers when retail businesses reopen on May 14, but people are still strongly advised to wear them.

It was a revision from the protocol released on Monday, which has stated they would be required.

“There is a wise, old saying, ‘None of us is as smart as all of us.,’” the governor said at his briefing on Tuesday. “And so, as we continue our journey together, to battle our shared enemy, I will continue to listen to your thoughts and ideas as we move through this process.”

He stated adjustments will need to be made to protocol as the state moves forward.

“Within the last 24 hours, it has become clear to me that a mandatory mask requirement for retail customers is offensive to some of our fellow Ohioans,” he said. “I understand that. We’ve heard you. We will not mandate that retail customers wear a mask. But we strongly recommend that you do.”

The governor said the original rule on masks came up when discussing the situation with a committee of business leaders. He said individual companies are free to make to their own requirements.

“If they want to decide that anyone who comes in the door, whether it’s a customer or delivery person needs a mask, that’s their decision,” he said.

DeWine said the revision also came after he spoke with a mother of autistic son and began to understand “the way he sees the world” and how he would perceive masks.

“So it’s not mandated, but we are suggesting best practices,” he said.

Dr. Amy Acton, the director of the Ohio Department of Health, said she agreed.

“I strongly support the decision not to mandate wearing a facial covering or mask, but I highly suggest it,” she said. “The business guidelines are strongly recommending it.”
She said she also encourages offices to allow employees to telecommute.

“We’re not out of the woods yet,” she said. “Keeping most of the movement down is till really important. This is a difficult time and I would hate to see us go backward.”

“Just because these are not mandated, they are still best practices,” he said.

DeWine also announced at the news conference the formation of a study group to work on the process of opening more businesses in fields such as restaurants, hair salons and others that were not included in the categories announced on Monday.

The state has said hospitals may begin elective surgeries on may 1, constructions, service and general offices may reopen on May 4 and retail can be allowed to resume on May 12.

The governor was also asked about high school graduations and whether schools can do outdoor ceremonies if they maintain social distancing and keep students six feet apart.

“If the school can figure out a way to do it, that might be an OK thing to do,” DeWine said.

Ohio Department of Health Director Amy Acton speaks at a news conference on the coronavirus pandemic in Columbus on Monday.... read more