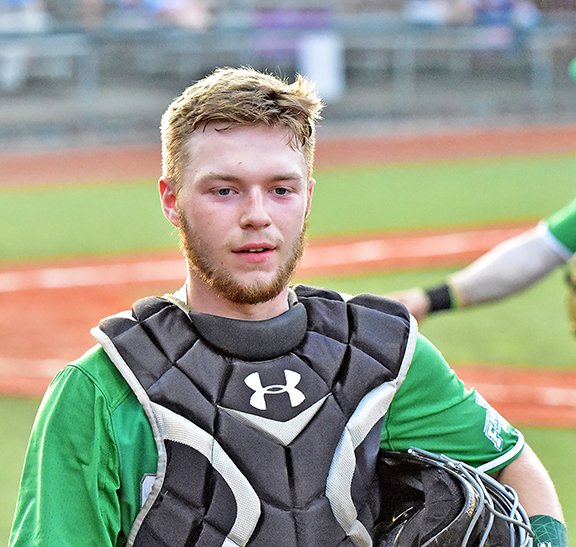 PROCTORVILLE — As far as Bryan Defoe is concerned, it was the best surprise party he was ever part of.
The Fairland Dragons’ senior catcher didn’t have any plans to play at the next level at the time Shawnee State coach Phil Butler contacted him about playing for the Bears.
“I didn’t even know they were looking at me,” said Defoe. “(Butler) shot me a text about a month ago and said they’d like to have me. So, I thought about it for about a week and then told them I’d do it after my season got canceled.”
Thanks to the offer, Defoe got his surprise gift as well when he signed a letter-of-intent to play for Shawnee State University.
The offer was not only a surprise, but it was an answer to Defoe’s dreams.
“I’m really excited. Everybody dreams of playing in the major leagues when they’re young, but for some reason for me I always wanted to play college baseball. If I get to play after college, that’s just me being rewarded for the time I’ve put in and to get to where I’m at. Once I get) to college), I’m going to keep working harder,” said Defoe.
The Dragons won the Ohio Valley Conference last season and reached the district finals as they finished 18-9. Fairland had virtually its entire team returning which made the announcement even harder that spring sports were canceled.
“It was tough for a few days, but it wasn’t as tough on me as it was for the other seniors. I knew I’m going to get to play again,” said Defoe.
“But, not getting to play with the same guys again was really tough. That’s what I was looking forward to. We could have had zero wins as long as I got to play with these guys. They are that amazing.”
Defoe — who caught almost every inning last season — had a .474 on-base percentage which was the second highest on the team behind leadoff hitter Tucker Adkins.
“(Butler) told me that they had five catchers there right now. I told him I could play anywhere on the field so they’re going to try me out everywhere. That’s why I’m going down there with an open mind. I say I’m going there to catch, but I’m going there to be on the field,” said Defoe.
Although Defoe caught the entire season, he said he’s capable of playing other positions which could be an advantage for him. Butler said the Bears had five catchers on last year’s roster.
Defoe surprised the coaches when he said he could play other positions which left him uncertain what plans the coaching staff have for the latest recruit.
“Honestly, I have no idea because they never talked to me. They told me they were going to sign two more guys and I was one of their guys they wanted to sign,” said Defoe.
“They have that many guys and they still want to bring people in from the area. There’s a lot of guys that aren’t even from here that are on the team.”
Defoe plans to major in sports management.

MIAMI (AP) — Politicians, players and owners are trying to figure out a way to get baseball, basketball and hockey... read more