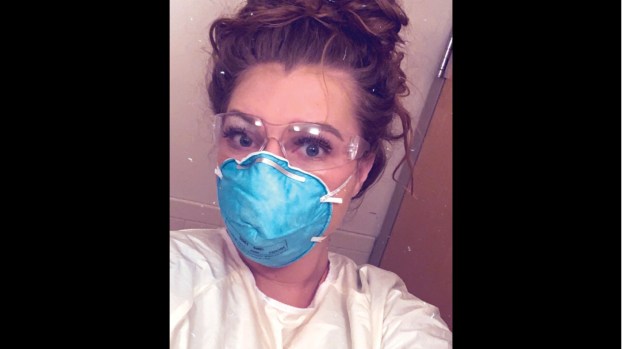 Kaylin Easterling, of Ironton, is working under an 8-week contract at a long-term care facility in Trenton New Jersey to help with the outbreak of COVID-19. (Submitted photo)

Kaylin Easterling saw that there was a need when the COVID-19 pandemic began to spread in the United States.

She said she came across information in groups on Facebook, seeking people to help with the situation in New Jersey, where cases were hitting hard.

“We talked first,” Easterling, who graduated from Collins Career Technical Center’s nursing program last year and who has previously worked for Crystal Care nursing home in Coal Grove, said. “And I got see how serious this is.”

Easterling agreed to take part in an 8-week stay, helping at a long-term care home in Trenton, where residents have tested positive.

“It’s a high risk being here,” she says up front. But she said, having no children or spouse, she felt she was more available than most nurses or aides to offer assistance.

She has been at the facility for about a week and will be under contract there through June.

Easterling said her duties there include taking care of patients’ needs and helping them get through everyday life.

“We try to make it the best we can for them,” she said. “Their lives have been turned upside down. They haven’t had any visitors.”

She said the normal routine of residents at the facility has been affected and, due to social distancing requirements, they can not interact closely with each other and are having to keep to themselves.

Easterling said there are two wings at the facility of roughly 100 residents and the wing she works in houses 37 people, over half of whom have tested positive for the coronavirus.

She explains how the residents are separated.

She said they have to follow strict protocol if they go from a room with a positive case to one with a negative.

“You can’t do that,” she said. “So, if the call light is on and they need medicine, you have to regown and put on a new gown and mask.”
Easterling said the experience has been “eye opening” for her.

“You don’t realize how serious it is until you get here,” she said.

Easterling said it was a major contrast to back home in Lawrence County, where the number of cases were low and some people were still not following guidelines on social distancing.

“I don’t blame them for not understanding, though,” she said, stating she did not realize the severity of the situation at first herself.

Easterling said she “didn’t broadcast” to many people that she was going to be doing the stay in New Jersey.

“My mom and grandmother freaked out,” she said. “They were scared for me.”

But she said, after discussing it with them and realizing it would be a great opportunity to help, they were strongly supportive of her.

Eastlerling said, as part of the contract, she is provided a free hotel and meals, which she is appreciative of.

“I’ve met people from all over the world,” she said of her fellow workers.

While she made the trip from Lawrence County alone, she said she has been in touch with Jordan Pinson, a nurse’s aide from Ironton who is doing a similar stay at another New Jersey facility about an hour from her.

She said talking with Pinson helped to ease her nerves.

While Easterling said she has not had a resident die on her shift, it is happening at facilities there, including the one Pinson works at.

“People are dropping,” she said.

She said the experience has been a positive for her and that it is her calling to help those in need.

“I don’t have anything to prove and I’m not trying to make a lot of money,” she said.

She urged those back at home to take the situation seriously, even though the current number of cases is not as high as New Jersey.

“It can happen there,” she said. “Follow all the guidelines — because, once it starts, this is stuff is serious.”

In response to the COVID-19 pandemic, the Lawrence County Department of Job and Family Services will make available assistance to... read more