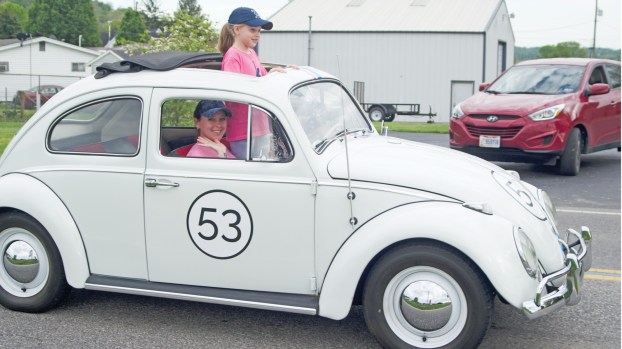 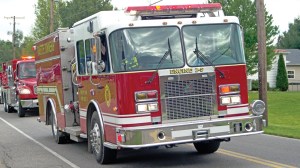 The South Point Fire Department takes part in the Social Distancing Cruise-In in the village on Saturday. (The Ironton Tribune | Heath Harrison)

SOUTH POINT — Chris Smith of People for the Point said organizers had hoped to attract about 30 or so vehicles for the South Point Social Distancing Cruise-In on Saturday.

Instead, a total of 173 comprised the event’s line-up.

Organized by a few residents with assistance from People for the Point, the event drew participants from as far away as Charleston, West Virginia, Wheelersburg and Kentucky, he said.

A suggested entry fee was a donation of canned food for local food pantries.

“We ended up collecting more than 300 cans,” Smith said.

Led by a South Point Police golf cart, the vehicles started rolling down Solida Road just after 6 p.m., first passing the Food Fair lot where a DJ was set up and several spectators watched by their cars.

Participants were asked to keep to groups comprised of their own household and to stay compliant with social distancing guidelines due to the coronavirus pandemic.

The rolling car show, which was comprised of antiques, motorcycles, a semi, sports cars and others, then proceeded on a route through the village, cruising through most of its residential neighborhoods, where families watched from their yards.

The procession ended with South Point police and fire vehicles, with sirens blaring.

A small group of children covered their ears near South Point Elementary as the vehicles passed near the end of the route.

Smith said they were pleased with the turnout, stating that most people had become tired of being confined, and once the auto enthusiasts learned of the event and its goal to aid food pantries, they were eager to take part in it.

Following the parade, Solida Road remained closed off and was used by vehicles as a cruise strip. A Kona Ice truck was set up, where a masked vendor served those stopping by.

While the public did not mingle or gather en masse, the event gave the village a shared experience and a chance to see their neighbors, though from a distance, after nearly two months of closures and stay at home orders.

Mayor Jeff Gaskin, who drove in the show in a dune buggy, said he had heard overwhelming praise for the event and that it, for the most part, went smoothly.

“We’d like to do it again,” he said. “We’ve had nothing but good reviews.” 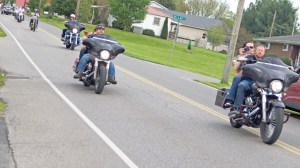 BCI gets a start on new marijuana testing