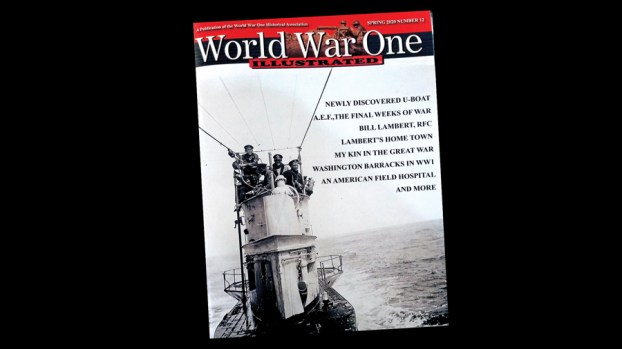 Articles about Ironton in a national magazine are a rare thing. But in this month’s World War One Illustrated there isn’t just one article, but two about flying ace Col. Bill Lambert.

“I love it, I was very proud my hometown dominated this issue of the magazine,” Unger said. “It was awesome. I was very thankful for that.”
Unger said he has always been a big fan of the history of Ironton, and now that he is a member of the fledgling William C. Lambert Museum and Archive, writing for the quarterly World War One Illustrated was a natural extension of his interests.

“Ironton has a terrific history of participation” in defending America, he said, starting with the 91st Volunteer Infantry, which was formed at Camp Ironton in 1862, the Seventh Regiment of volunteers from Ironton who fought in the Spanish American War, World War I and World War II.

“The story of Colonel Lambert was a natural if you know the great and illustrious history of this city,” Unger said. “It is definitely worthy of being put into writing.”

Unger is also a military re-enactor with the 91st Volunteer Infantry group, does World War II re-enacting and “dabbles in World War I.” He gets magazines that cover all those subjects.

Unger met Wilson a few years ago when the professor was writing his book on Lambert, “The Life of William C. Lambert.”

“He did some tremendous research which proved Col. Lambert was the second-highest scoring World War I, he had 22 and half victories,” Unger said, adding that a half victory is when there are two airplanes that were involved in taking down an enemy plane and the victory is shared between the pilots.

Unger had Wilson at Unger’s Shoes for a book signing after it was published and the two remained in contact. And both are members of the William C. Lambert Museum and Archive, which Unger said is not in competition with the Lawrence County Museum.

The museum is seeking volunteers and members. To find out more about it, go to their Facebook page, William C. Lambert Military Museum and Archive or their website, www.lambertmu.org.

Ohio University Southern is hosting an IT and Internet Security Best Practices session on Tuesday with presenter Larry Tumblin, director of IT for Ohio Regional... read more