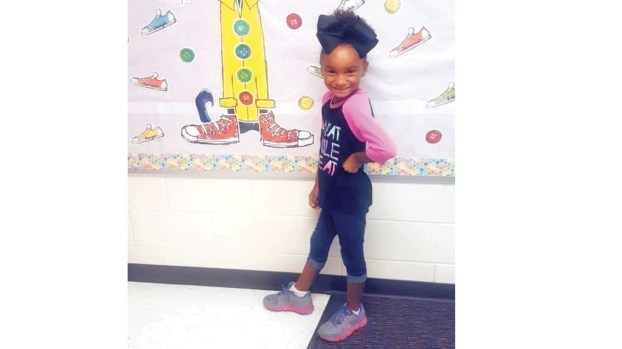 Layla Wilkerson, 6, a student at Ironton Elementary was able to help save her grandfather, Jason Taylor, when his artificial dialysis vein pulled loose. The girl was able to get the phone to call 911 and to wrap his arm and stop the bleeding. (Submitted photo)

Helped to call 911 and slow bleeding from accident

An Ironton man is recovering from what could have been fatal mishap, thanks to the timely intervention of his granddaughter.

Layla Wilkerson and her sister were staying with their grandfather, Jason Taylor, in Ironton on Sunday.

“I dropped them off at my parents’ house,” the girls mother, Alexandra Taylor, said.

It was around 9:30 a.m. when Mr. Taylor went into the bathroom and took the tape off his dialysis artificial vein.

“He pulled it off and blood went everywhere,” Alexandra said. “If Layla wasn’t up, he would have bled out.”

Fortunately, Layla was able to wake up her grandmother, as well as get the phone so they could call 911. And she helped her grandfather wrap his arm in a towel to help curb the bleeding.

“She never left her Paw-Paw’s side,” Alexandra said.

Layla recounted finding her grandfather in the bathroom.

“I saw blood everywhere,” she said. “He said ‘Wake up Maw-Maw.” And I gave her the phone to call an ambulance. He was about to pass out”

Alexandra said her daughter, who starts first grade in the fall, has known of her grandfather’s condition, is always there to help and has an interest in health matters.

“She’ll probably grow up to be in the medical field,” she said.

Mr. Alexander was rushed to a hospital, where he was given a transfusion. He has since recovered and was taken home on Tuesday.

“He lost a lot of blood,” Alexandra said, but says he is doing better and is eager to reunite with his granddaughter.

Layla said she is happy he has recovered.

“He can go back home and now we can go clean his house,” she said.

For the past five decades, members of the Ashland Area Ministerial Association have gathered on the steps of the Lawrence... read more