McDavid’s competitive and caring nature will be missed 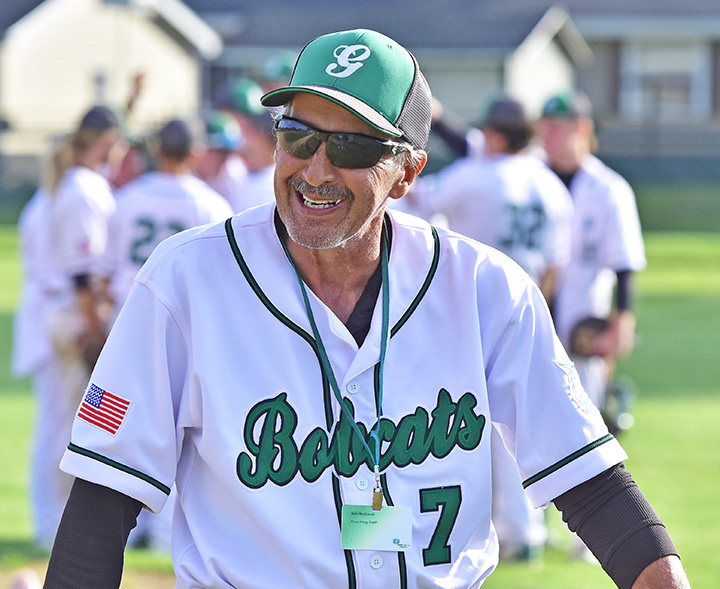 It was the 1972-73 high school basketball season. The St. Joseph Flyers were playing the Green Bobcats in the old Green High School gym.
A left-handed Dan McDavid — the team’s best outside shooter — had put up maybe three shots and missed them to start the game. He got the ball again a few feet in front of the Flyers’ bench.
“Shoot the ball, Tommy (gun). You’re loaded,” I yelled at him from my seat on the bench.
Dan shot the ball and missed, then quickly turned toward the bench and flipped me the bird. I couldn’t help but laugh.
That was my first interaction with Dan McDavid. And while it was humorous and memorable, it personified his character.
He was a competitor who wore his emotions on his sleeve. He had no problem telling you how he felt.
So, I can tell you after learning of his death on Monday at the age of 66, I have no problem telling anyone how I felt about him.
“Dan was one in a million. There’s never been one like him and I don’t know there will ever be another one like him,” said Chris Meenach who coached baseball with McDavid and officiated with him for many years.
“It was a privilege for me and (son) Jason to officiate the last six years of his career with him. We called 70 or 80 games a year and I’ve coached (baseball) with him the last 10 yearsso we’ve spent a lot of time together the last 10 years. It’s a tough one to take.”
Once I began covering sports for The Ironton Tribune, I got to know Dan pretty well. I also got to appreciate what he did and I also got to watch him develop as a basketball official. I’ve seen a lot of good basketball officials through the years like Allen Russell, John Tipton, Tom Hardy, Mel Carter, Scott Jenkins, Mark Michaels, Chuck McKnight, Tommy Pinkerman, Joe Swarts and the list goes on and on.
But Dan McDavid was the best. His demeanor never changed. If he missed a call, he admitted it. He let you play but he controlled the game. He let coaches have their say, but when he had enough, he would tell you and you knew it was time to back off.
I’ll never forget the words of Chuck Delawder who call football and baseball. If a football coach got on Chuck, he’d refer them to rule 22-5. The coach would ask, “What’s rule 22-5?” And Chuck replied, “There’s 22 of them and only five of us.”
That was Dan’s approach. But he didn’t miss too many calls so coaches didn’t get after Dan very often. And if he missed it, he didn’t let it affect his next call.
“Dan didn’t take much crap from anyone. You didn’t have to wonder about what he was thinking, either. He’d let you know,” said Meenach. “He wasn’t the kind to sugarcoat or hold back.”
Dan was a three-sport standout for Green in football, basketball and baseball. He later coached his alma mater in football and guided the team to its only unbeaten seasons in 1989 and 1990 with both teams qualifying for the playoffs only to lose to eventual state champion Newark Catholic coached by the legendary J.D. Graham.
And the Bobcats played the Green Wave tough in both games.
Dan took over the Green baseball team in 1986 and the Bobcats reached the state tournament for the only time in school history. They lost to Sidney Lehman in a game they led until a 5-hour rain delay and then lost once the game resumed with different umpires.
He was the South Point head coach for four seasons and then returned to coach at Green. After his second stint, he took a job as the defensive coordinator at Portsmouth West and just signed another contract to return to the position this fall.
He was supposed to be the head baseball coach for the 11th straight season at Green in his second stint and try to defend their Southern Ohio Conference championship. The Bobcats have won three straight SOC titles — two outright and unbeaten — and his teams have won a sectional title in eight of the 10 seasons.
“If you had anything to do with high school sports in the last 30 years or more, you would know him,” said Meench.
“And it was about the kids. He’s stick up for them hard. He’d fight for them. But don’t do something wrong. He’d let you know. He wasn’t one to hold back his feelings. There were a few people who didn’t like him, but if you didn’t like him, you had to respect him. All some people know is the competitive side. You didn’t know how much he cared about the kids and the things he cared about. The things he cared about, he cared about passionately.”
One of the things you won’t find is a composite coaching record in football or basketball for McDavid.
“That wasn’t one of his big worries,” said Meenach. “He always told every player the first day of practice, ‘we play for championships around here, so you better get used to it.’ I think every year for the last 10 years we played for some type of championship.”
No doubt Dan’s attitude and competitive nature will be missed.
Along with that caring smile.
—————
Jim Walker is sports editor of The Ironton Tribune.