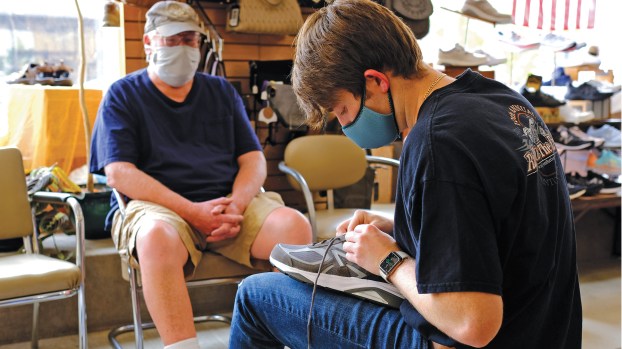 Izsak Unger helps a customer on Thursday with a pair of sneakers at Unger’s Shoes. (The Ironton Tribune | Jeremy Holtzapfel) 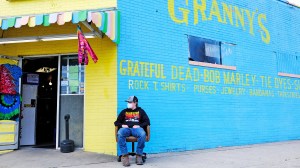 Retail businesses were permitted to reopen from the coronavirus pandemic on Tuesday, but stores in Lawrence County are making their own decisions on when to resume operations, with some allowing customers to return, while others have opted for a later date.

Valerie Freeman, owner of Treasures From the Valley on Vernon Street in Ironton, said she reopened on Tuesday.

“We’re allowing four guests at a time,” she said.

She said business has been returning, with customers coming in to buy graduation gifts, as well as the popular 740 area code T-shirts.

Another popular item is face masks, which Freeman says are made in the store and available for $5.

She is continuing to offer curbside pickup for customers who do not feel comfortable entering, something she has had available the past few weeks.

“We’re still doing our best to serve our customers,” she said. “And we respect their wishes if they prefer to do curbside.”

Freeman said the Spring on Vernon event she had planned was canceled due to the limits on mass gatherings, but she hopes to bring similar events to downtown when normalcy returns.

“I have a lot of ideas,” she said for plans when the pandemic ends. “We will be celebrating. We want to see our community again.”

She said they are doing their best, in the meantime, to keep downtown alive.

“We want to see our downtown succeed,” she said.

She said she is waiting until June 2 for her reopening.

“I’ve been here three years and am wanting to revamp my store, anyway,” she said.

She said while the shop is closed, she has been doing live sales each Friday on Facebook.

“Those have been going really well,” she said.

She said she is adapting to the way people have changed how they shop, and the online events have been just as successful as a typical week in her store.

Over on Center Street, The Vault Market is also holding off on reopening.

Co-owner Abby Kuehne said they are aiming for a June 1 date.

She said the store began offering curbside pick-up about a month ago and is doing local deliveries to the 45638 ZIP code.

She said they have taken the time closed and used it to begin offering sales on the store’s website.

Keuhne said before the pandemic hit, they had not done so, but had plans in the works.

Since then, they have been selling many items from the store’s inventory online. The first items they offered were the store’s logo shirts, but they have since expanded to other items.

“And we have been shipping nationally,” she said. 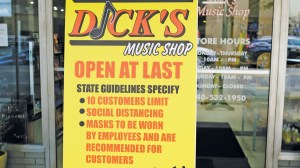 Another holding off on opening doors for now is Merle Norman on South Third Street, which moved to its downtown location last year.
Owner Diann Waggoner said she is planning for the last week of May.

“I’m not comfortable yet,” she said. “But when I do open, we’ll be wearing masks and I’ll have those for people who come in. And we’ll have sanitizer.”

Waggoner said she has been working at the store in the meantime and receiving shipments of new products from Merle Norman. She has been taking orders over the phone and allowing customers to do curbside pickup.

On South Fifth Street, Granny’s opened its doors to customers on Tuesday.

Ricky “Freebird,” who described his position as “sales extraordinaire” at the shop, said they are maintaining an occupancy set by the county health department.

“We’ve installed plexiglass at the register and employees are wearing masks and doing temperature checks,” he said.

He said hand sanitizer is available for customers to use and the floor has been taped off in six-foot segments to make social distancing easier.

“And we have a guy sitting outside to make sure the customer count is right,” he said.

Dick’s Music Shop reopened on Tuesday at its location on Third Street.

“We were ready to go,” owner Rowena Mollette said. “We’re full service. Come in and look around.”
Mollette said they are following state guidelines and employees are wearing masks and asking all inside to practice social distancing. 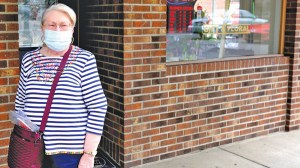 On South Third Street, A Touch of Grace is open to customers.

Florists were deemed an essential business under the state guidelines and he was permitted to stay open. He said, prior to last week, they had been operating behind closed doors.

Hackworth said they had a special cleaning done of the building and are wiping down surfaces like doorknobs.

“We never missed a beat,” he said of the business, which is celebrating 25 years of in operation.

Unger’s Shoes opened their doors to the public again on Tuesday.

“We are delighted to be open,” said owner Joe Unger.

They’ve spent the past four weeks only letting people in by appointment, doing curbside service or doing online sales, which was a first for the store, to customers they have already been serving for years already.

“We are a ‘sit and fit’ shoe store, so we don’t really like to operate online,” Unger said. “We did it because of COVID-19 pandemic. So far, it has only been for customers that have shopped here for years so we knew what kind of shoe to show them. So that worked out good.”

And with the store open again, customers have flocked to the store.

“I think there is a lot of pent-up demand,” Unger said. The store closed back when it was more of a demand for winter shoes and now there is a demand for spring wear. “I think the business we have shows that because we have been covered up with customers, thank the dear Lord.”

It was tough for the business, since April is one of the months of highest demand, with people buying shoes for both spring and for Easter.

“So, it was very difficult,” Unger said, adding there were five days when the store wasn’t open at all.

Only two things have shut down Unger’s Shoes since it was started in 1937. The second is the current pandemic. The other was when Joe’s father and founder of Unger’s Shoes, Gene Unger, closed the store in 1942 so he could join the U.S. Army. It didn’t reopen until World War II ended and Gene

Unger returned to the store in its current location the corner of Vernon and Third Streets.

“Even when we did our full expansion into the building next to us in the mid-1980s, we were open despite the construction,” Unger said. “There would be saws whirring and we would be fitting shoes.”

OU to reopen campuses this fall

Groups working on safety plans Ohio University is planning to reopen its campuses to students this fall after closing them... read more