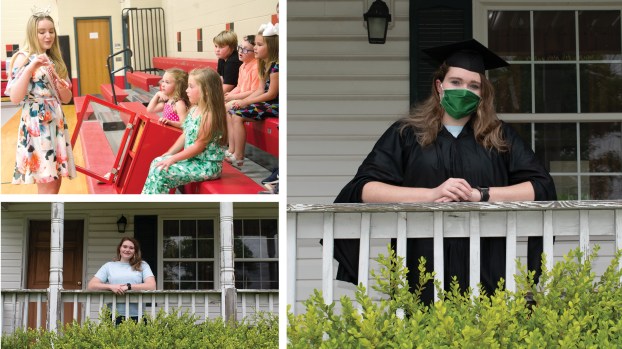 LEFT: Olivia Fosson shows books to Dawson-Bryant Elementary students in this 2018 photo. Fosson is a sophomore at Oklahoma City University, studying music theatre. She returned to Kitts Hill for spring break, but was unable to go back to Oklahoma due to the pandemic. (The Ironton Tribune | Heath Harrison) RIGHT: Jessica Baise, of Chesapeake, was a senior at Ohio University attending the Athens campus during the pandemic. She is now an alumna, having studied applied nutrition and graduating as a member of the class of 2020. (The Ironton Tribune | Taylor Burnette)

Sent home in a hurry

By Taylor Burnette
The Ironton Tribune

Many college students from Lawrence County were sent home due to the COVID-19 outbreak and completed the remainder of the semester online.

Students faced various challenges, ranging from trouble with online classwork and fears over finances, to retrieving items from a school hundreds of miles away. Some even missed out on their final undergraduate semester.

Olivia Fosson is a rising sophomore at Oklahoma City University, studying music theatre. She returned to Kitts Hill for spring break, but was unable to go back to Oklahoma due to the pandemic.

For Rachel Decker, a rising junior from South Point studying biochemistry and healthcare studies at The University of Richmond, some of the biggest worries centered around finances.

“The thing that I was stressed out most about was because I pay my own bills. I have a set number of hours for my campus job,” Decker said. “I was completely blindsided when my university said ‘Don’t come back.’”

She said she became financially anxious during this time. For weeks, Decker’s thoughts centered around how she was going to continue to pay her bills.

The university eventually provided her with pay for the rest of the time she was supposed to work during the semester.

Decker, like many other students, said she had trouble transitioning to online classwork.

“It was extremely rough for me,” Decker said. “I will not learn if I’m not forced to learn, and being required to attend classes is something I really need structure-wise.”

Many of her professors made classes optional in an attempt to accommodate all of their students’ new lives at home. The choice provided led Decker to stop going to class entirely, although she was able to catch up later in the semester.

Nick Wood, a rising junior at Wright State University majoring in media studies, continued his semester at his home in South Point, as well. He also found the transition to online classes very difficult.

“Taking online classes requires a lot more of yourself, to be motivated… which is really difficult to do when you’re just in your room, in your pajamas, in your bed,” Wood said. “On top of that, there’s a global pandemic. It doesn’t seem like [school] matters very much right now.”

Wood said that around a week after returning to campus from spring break, students were sent back home. A week after that, online classes began.

Wood said most of his classes transitioned to an online format quite well, but others, not so much. One professor, he said, emailed students all of the notes and an exam that could be completed using those notes.

“It was kind of not a real class at that point,” Wood said. “I wasn’t learning anything.”

Jessica Baise, of Chesapeake, was a senior at Ohio University attending the Athens campus during the pandemic. She is now an alumna, having studied applied nutrition and graduating as a member of the class of 2020.

“I didn’t get to have my lasts,” Baise said. “It feels like a chapter hasn’t officially closed, but I’m still moving on in the book. It feels very sad, because I wanted to finish up my senior year, but I understand why it was best.”

Baise said that she was blessed with having the classes she had during the spring semester. She said she would have struggled more if she had the classes she took in the fall.

“It felt like some professors were asking more than was originally assigned, but towards the end, I know a couple of my professors said ‘just turn something in and we’ll give you full credit for it.’”

Although Baise felt she had easier classes, she too found the transition to online tough. Although she enjoyed being able to rewind lectures and go at her own pace, her motivation was very low.

“Where I’m a senior, and I’m home, my motivation was at an all-time low,” Baise said. “It was kind of hard to find the motivation.”
Baise sympathizes with seniors, both in high school and college.

Younger students, like Fosson, who would typically return to school, are beginning to hear whether they will or not. Oklahoma City University, Fosson said, is planning on having classes during the fall, unless there is another outbreak.

Fosson also worries about the many students throughout the Tri-State who do not have broadband internet access, and therefore reduced access to online schooling.

Wood said he has begun to see changes at Wright State University. The university, Wood said, is already in a time of financial hardship, and the financial situation has greatly changed with the pandemic as well.

The pandemic hit close to home for Decker, who had friends who tested positive for COVID-19. Decker said The University of Richmond sent an email saying that they were going to try their hardest to have students back on campus in the fall, but that there will be new and different precautionary measures in place.

Seniors across Lawrence County were set to take part in the traditional end-of-year activities, like prom and spring sports and... read more