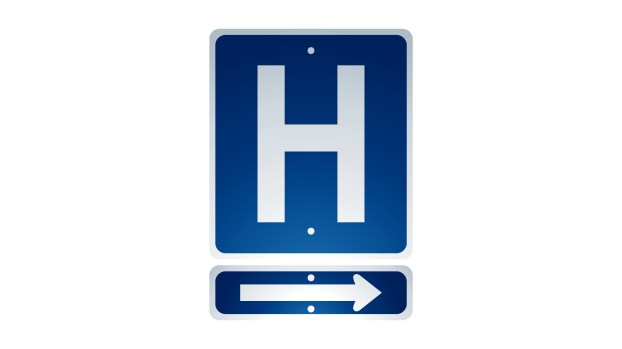 Plans in place for surge in COVID-19 cases 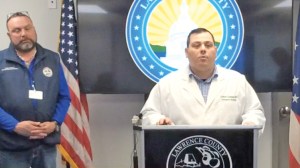 Lawrence County Commissioner Colton Copley, who is also an emergency room physician at Cabell-Huntington Hospital, speaks at a news conference in April. (Screenshot)

With the coronavirus pandemic continuing, one concern for the medical community is a surge of COVID-19 cases.

While Lawrence County has had only a minimal amount of cases, 28 as of Friday, pandemics have historically had a second wave of cases and the county government has plans in place if hospitals should be overcrowded with cases.

Lawrence County Commissioner Colton Copley is in a unique place when it comes to planning for a countywide medical emergency. Besides, being a government official, he is also an emergency room physician at St. Mary’s Medical Center and Cabell Huntington Hospital in Huntington, West Virginia.

He, along with the other two county commissioners, DeAnna Holliday and Freddie Hayes Jr., worked with the county health department, the county Emergency Management Agency and other agencies, creating plans on how to deal with the pandemic.

Just one of those plans was to set up a medical facility outside of the local hospitals if they went beyond their capacity to treat people, although there wasn’t much of an expectation that the hospitals would be overwhelmed.

“We have plenty of capacity in our local hospitals to care for a large number of people in case there is a surge,” Copley said. “We have worked really hard, especially in the emergency room, to keep COVID patients separated from non-COVID patients.”

He said an example is that when people come into Cabell Huntington Hospital’s emergency department, the staff makes sure people with what could be symptoms of the coronavirus are put into isolation areas in an effort to prevent potential spread of the virus.

Copley said that from the hospital reports he has seen, there are a “low number of COVID patients in the hospital right now, but we have a large amount of ventilator space and bed space available. So, I think the capacity in the Tri-State is ready in case of a surge.”

But still, the county has a backup plan in place — if the hospitals are overwhelmed, the county is ready to use the Collins Career Technical Center in Getaway as an emergency facility on short notice.

Copley said the site was chosen because of its location in the center of the county, it is a large building with some medical supplies onsite and it can be divided up and be utilized as needed.

“We have discussed that with the vocational school, but that is the worst-case scenario,” Copley said. “That wouldn’t kick in until the places that are specifically built to give the best care would go beyond their capacity and we would have to come up with a makeshift facility.”

The chances that a makeshift medical center at the joint vocational school would be needed is unlikely.

“And we can flex those beds,” he said, meaning that the beds can be switched from patients in for medical procedures or ailments to units for COVID-19 cases.

The hospital already has procedures in place to deal with patients with the coronavirus.

“The ER has a specific area for suspected COVID patients that come in,” Deere said. “We also have a unit set aside, if needed, for COVID patients.”

If there was a surge of cases that would put KDMC beyond its bed capacity, there is the former Our Lady of Bellefonte Hospital, which was closed on April 30.

“We do have permission to use it, if needed,” Deere said. In April, KDMC announced the two hospitals had reached an agreement to use the OLBH facility and equipment. “That is an option that we use only if needed. That would be a decision made by administration and medical professionals based on medical need.”

Based on current COVID-19 cases in the Tri-State, it is unlikely that patients would overwhelm the local hospitals.

“So, that would be used before we would ever create a surge hospital in Lawrence County,” Copley said. “But, if we were in the worst-case scenario and they were overwhelmed, we would begin to get our facility ready. We just never got to that point.”

Copley said as the pandemic broke out, hospitals saw less people coming in for elective and other surgeries, which freed up bed space if it had been needed.

“But we are blessed that our COVID numbers were low enough, we weren’t even close to getting our hospitals up to their normal levels, let alone being overloaded,” he said. “We’ve been very fortunate that we haven’t had to implement the emergency plans, but we were definitely prepared to, if needed.”

Even as states open up businesses like restaurants and stores to business with social distancing, many health officials remain concerned about another surge of COVID-19 cases.

Copley said it was a possibility that a second surge could happen.

“Similar to every virus we have seen come in a similar fashion, N1-H1, the SARS virus, influenza, they come in seasons,” Copley said. “We have waves where they come and go. We see a big surge in the fall and winter and then we usually see a decline in the spring and summer. We expect that this virus will behave similarly as other coronaviruses that have come before this one.”

Copley said the difference is that officials don’t know how many people have been exposed to COVID-19.

“We think that the numbers are higher in the community as far as exposures and possibly building some resistance to this than we know. Because, maybe some people were exposed and never had symptoms because their bodies have built some antibodies to fight it,” Copley said. “But until we won’t really know because we don’t antibody test everybody. We don’t antibody test everyone for the flu either. We are just hoping that they work fast on the vaccine and we can get that to the public and decrease the number of severe cases by vaccinating people.”

He said he doesn’t expect a vaccine by fall, “but I am hopeful that they will have it within a year from now, from what I have read. Hopefully, before next summer, but these things take time.”

Editor’s note: This will be the first in a recurring series of articles speaking with experts on a path forward... read more