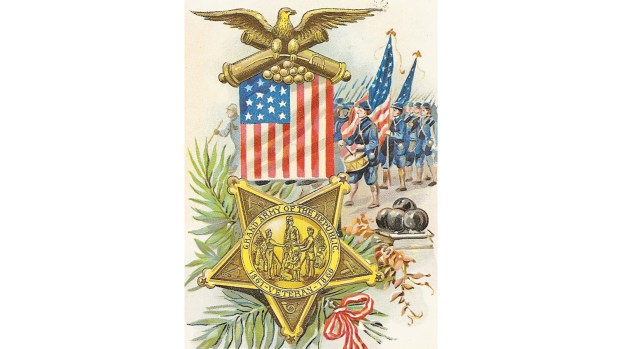 Postcard depicting the emblem of the Grand Army of the Republic. The G.A.R., who founded the Ironton-Lawrence County Memorial Day Parade, was honored in the 1918 parade, which took place during the Spanish Flu pandemic. (Public domain)

2020 is second parade during a pandemic: Memorial Day came months before 1918 flu

This year, organizers of the Ironton-Lawrence County Memorial Day Parade faced a unique challenge in holding the event and maintaining public safety during the COVID-19 pandemic.

But history shows that the event has had to take place a pandemic year before, with the 1918 parade being held as the nation was dealing with the Spanish Flu pandemic.

One of the deadliest in history, that global pandemic, wrongly attributed to an origin in Spain, infected more than 500 million people, about one third of the world’s population. Death tolls from the 1918 flu range from 17 to 50 million.

Edward E. Corn was grand marshal that year and, according to an article in The Ironton Advertiser (one of two newspapers that later combined to form The Ironton Tribune), the city’s police chief George Mayne led hundreds of marchers that year to Woodland Cemetery where they placed flowers on graves for Decoration Day.

The parade has its roots in the Grand Army of the Republic, a veterans group for those of the Union side of the conflict, who established the event three years after the war’s end. Taking place 53 years after that conflict, the youngest of those veterans in 1918 would have been about 70 years old.

The Union veterans made up the fourth division of the parade that year, carried in early model automobiles and followed by the Woman’s Relief Corps, the auxiliary to the G.A.R.

“These old, war-stained and aged heroes made a good showing, despite the thinning of their ranks by the inevitable march of time,” The Advertiser reported.

According to the reporting in 1918, that year’s parade set an attendance record at the time and no restrictions were mentioned.

This was likely due to the fact that the first wave of the Spanish Flu impacted mainly the coasts of the U.S. With the era’s much slower travel, concerns likely had not reached the Tri-State region by that point.

The second wave of the pandemic hit Ironton in late September, along with the rest of the Tri-State. And it was on Oct. 8 that the Ohio Department of Health made recommendations to close all public gathering places.

By the end of October, Lawrence County had 907 reported cases of the virus. By the time of the next year’s parade the following May, the pandemic had largely passed.

The parade commander of the 152nd Ironton-Lawrence County Memorial Day Parade was Lou Pyles, who is also one of the... read more