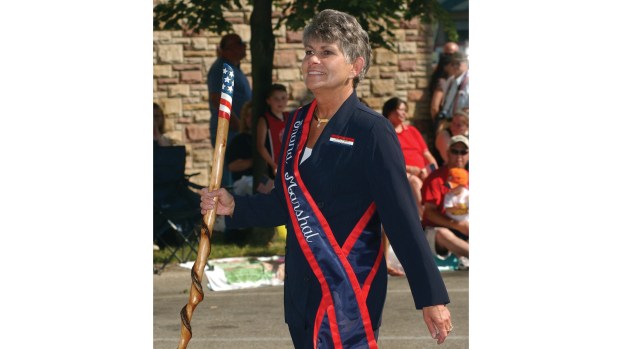 The parade commander of the 152nd Ironton-Lawrence County Memorial Day Parade was Lou Pyles, who is also one of the many people who have helped put on the parade for years.

She was the grand marshal in 2006 and has been involved with the parade for 33 years.

When an entry form is submitted for a group to be in the parade, she’s the one that calls them back and tells them what division they will be in and makes sure they know when to show up and what the theme is.

She also helps organize the Navy Night ceremony that honors those lost at sea, the Woodland Cemetery ceremony and past grand marshal dinner.

With the coronavirus pandemic this year, she knew the parade would be vastly different than anyone alive had seen.

The first question was whether or not they could even hold a parade.

“That wasn’t hard,” Pyles said. “We knew we had to do something to keep the historical value of the parade going in this community. If we let this go for a year, then we start over at one in 2021.”

She knew they had to do some type of organized parade or walk to keep the Ironton-Lawrence County Memorial Day Parade going as the nation’s longest, continuous-running parade.

The parade committee got permission from the Ironton mayor and then asked the Lawrence County Health Department for guidance.

The health department had to ask permission from the governor’s office, since any parade would violate the state’s rule about gatherings of more than 10 people.

“I did not know what was going to happen,” Pyle said. “The governor was fine with it, but the parade could not grow.”

That meant that the parade committee had to tell a lot of groups seeking late entry into the parade that they weren’t allowed.

Pyles said that hardest part this year was calling groups that had been in the parade for so long and telling them their entries were canceled, unless it was a veterans’ organization.

“That’s what we cut it down to,” she said. “But our main concern was to keep the parade going for 153 years for this community as well as the health and welfare of our citizens.”

She is also the owner and operator of Lou’s Style Shop.

Sally Markel-Inglis is a native of Pedro and currently lives in Florida. This year, she was named as the honorary... read more