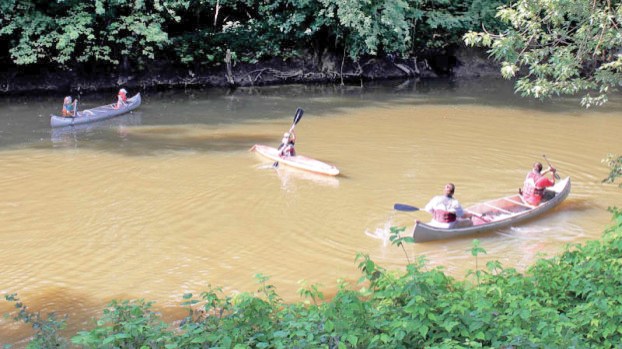 Preserving the Symmes Creek watershed is a win-win for Lawrence County, keeping the environment clean and creating tourism opportunities, the chairman of its caretaker organization says.

The Symmes Creek Restoration Committee was founded in 1977, with the intent to “promote good stewardship of the Symmes Creek watershed,” Joe Benning, its chair, said.

“We do this by emphasizing the beauty and recreational opportunities on Symmes Creek that are meaningful to our county,” he said.

The seven-member board hosts several events throughout the year in order to fulfill its mission.

For instance, on June 26, the group plans a paddle-in clean up at Timbre Ridge Lake in Letka.

Located on the Gallia County line off of County Road 37, Benning says it is the only paddle-in campground in the region.

The group will take part in litter clean-up of the area and then will camp on the sites, which can only be reached by boat.

On Aug. 8, they will host their annual Canoe Caper, a fundraiser at the Chesapeake boat launch, where they will raffle off a kayak donated by the National Wild Turkey Federation.

Benning says the group is working on a grant to place signage throughout the watershed, which runs from Arabia to the Ohio River, identifying boat launches and other features.

He said they are partnering with Project Lead the Way STEM students from Collins Career Technical Center in order to do this. They are also looking into redesigning and improving the launches.

While the COVID-19 pandemic has hampered some of their work this year and called off some events, Benning says he is optimistic they can pull off the upcoming ones and still maintain social distancing, if required.

In fact, he said the tourism opportunities offered by the watershed could be a boost to the area’s recovery, post-pandemic.

“It could be a help to Lawrence County, coming out of COVID-19,” he said.

Benning said the group was incorporated with the help of attorney and former Lawrence County Prosecutor Richard Meyers, who died at age 79 earlier this month.

“We lost a great supporter,” he said, stating that Meyers worked with the group in talking to landowners about creating access points to the creek.

The group has partners with Ohio University Southern, who did a study on the wildlife of the watershed, including 30 species of fish.

“And there are 18 different species of mussels,” Benning said. “Three of which are endangered. You never realize how many varieties Symmes Creek supports.”

Benning said the group recently redesigned their logo, emphasizing kayaking, and had planned to enter a float into this year’s Ironton-Lawrence County Memorial Day Parade before it was scaled down due to the pandemic.

“It was going to be our big roll out,” he said. “But that will have to wait.”

He said he has seen success in the group’s mission. In earlier years, they would fill a dumpster with trash from the clean up. These days, he said they have to actually look for it, showing that people are making the effort to be good stewards.

“This is good, because there’s more time to enjoy the water than to pick up trash,” he said. “If we keep the trash down, more people will be willing to come here.”

And he said those paddlers will be an asset for the county, “emptying their wallets” at place like bed and breakfasts, local stores and restaurants.

Another area the organization works on is clearing the creek and its tributaries of log jams.

Benning says that those who spot a jam can contact the group on their Facebook page and provide its location. They will then work with groups they partner with to clear them.

Benning said this helps to prevent flooding and soil erosion. He said the cleared wood is offered to the landowner as firewood or hauled off.

The group meets regularly, with their next event set for July 4 at Lake Vesuvius, a partnership with the Wayne National Forest.

The coronavirus pandemic is affecting everything, including how the Ohio Department of Natural Resources is operating the state parks. The... read more