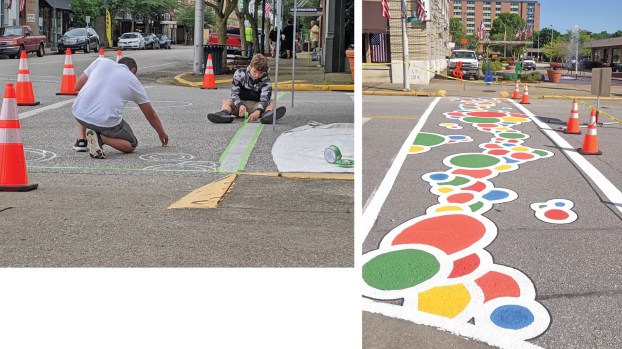 Last weekend, the first of a series of artworks was installed in crosswalks near The Vault Market in Ironton, and two more are set up to go into place this weekend.

Abby Kuehne, co-owner of The Vault Market, said the pieces were part of a grant the nonprofit organization Third and Center received from the Ohio Arts Council.

The organization recently installed a series of artistic bike racks in that area of downtown, near the Rotary Fountain.

Kuehne said the first piece was by artist Jesse Jiles, a graduate of Rock Hill schools, who did the work with help from his nephew, Levi Jiles.

She said the group chose his work because of its fun theme and geometric designs.

“We thought its really cool pattern translated well to the space,” she said. “It could be enjoyed by anyone and was not specific.”

This weekend, the other two pieces will be installed by inmates of the STAR Community Justice Center.

Kuehne said the grant, which also covered the bike racks, funded one half of the projects and the community matched the other half.

“We would like to thank the community for their support and feedback,” she said. “It wouldn’t be possible without them,” she said of the group’s work. “We’re always accepting donations and we hope to do more.”