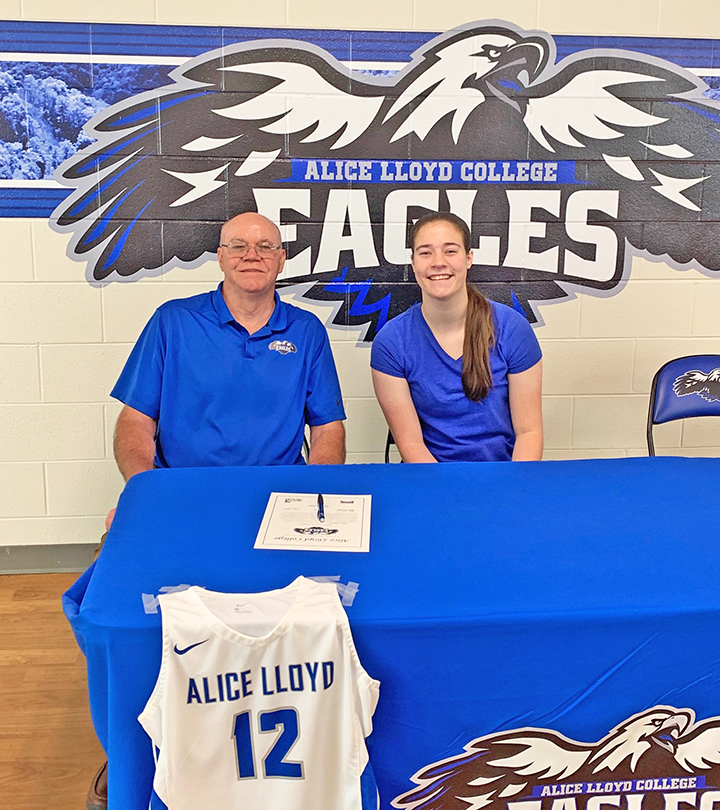 Similar to the Edward Everett Hale short story “The Man Without A Country,” Riley Schreck was a player without a team.
But while the character Phillip Nolan never got to set foot on American soil again, the Ironton Lady Fighting Tigers’ three-sport standout found a new team and has already set foot on the campus.
The 5-foot-9 Schreck signed a letter-of-intent Friday with the Alice Lloyd Eagles to play basketball with an even better financial package than her previous choice Urbana.
Schreck’s letter-of-intent with the NCAA Division II Blue Knights became worthless when the school closed for good during the COVID-19 pandemic.
After a Zoom Chat with the employees at Urbana informed them the school was closing and they were all now unemployed, Urbana women’s head coach Andrea McCloskey made that fateful phone call.
“She told me I’d have to find a new place,” said Schreck. “She was pretty upse.”
Scheck — who also played volleyball and softball — said she has gotten a lot of calls, emails and texts from a lot of coaches, Alice Lloyd coach John Mills remained in contact regularly.
“He’s been pretty excited about it. He was excited I got to come there. He’s been calling me ever since the closing (of Urbana),” said Schreck.
Schreck averaged 10 points a game last season and is an outstanding 3-point shooter, hitting better than 35 percent of her long-rang attempts which was perfect for Mills who likes an offensive game.
“I’ll probably be a two or a three, but I’d say a two. They like to shoot it,” said Schreck.
With academic money and the Tiger Clan recipient, Schreck said her school year will be paid.
Schreck still has to pay $1,100 which is the amount every student must pay, but “I got the Tiger Clan and that’s $2,000 and that’ll cover two semesters,” she said.
The 5-foot-9 Schreck was a Division 3 third team Southeast Ohio All-District selection last year and first team All-Ohio Valley Conference.

Quieter Mayfield knows third season will be vital for him

The Associated Press Baker Mayfield went back to his roots during this strange offseason, a time he’s used to reflect... read more