Tyler Childers gets his name on Country Music Highway sign 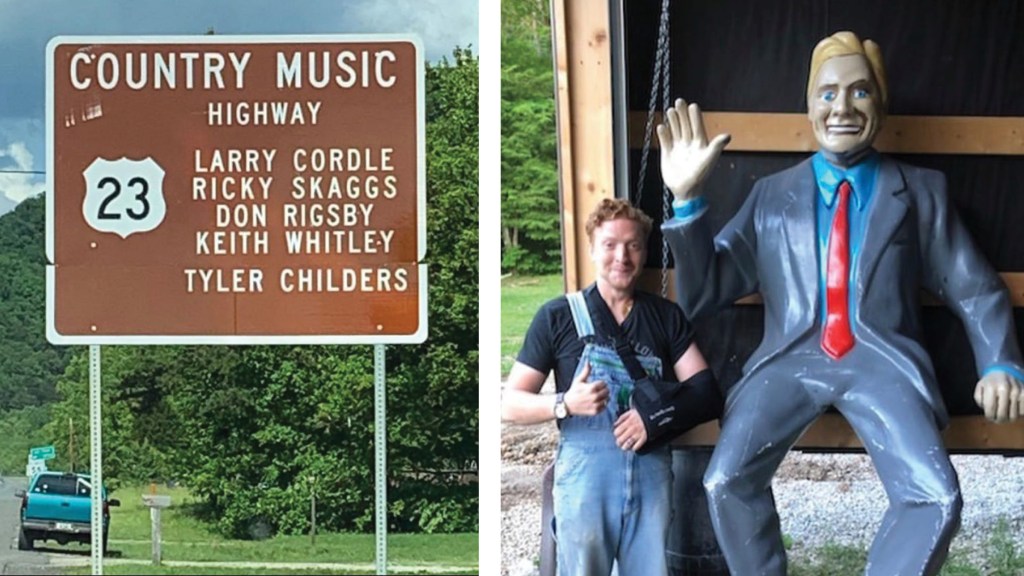 The country music star announced on Facebook and Instragram that he had marked two things off his bucket list, he got his name on a federal highway sign and he bought a statue of a disgraced lawyer.

The Paintsville, Kentucky native posted a picture of a sign on U.S. 23 that marks the route as part of the Country Music Highway and his name was newly added to the list of local musicians that include Larry Cordle, Ricky Skaggs, Don Rigsby and Keith Whitley.

And for some reason, Childers bought a statue of disbarred, and now infamous, lawyer Eric Conn. The statue once adorned a billboard along the same stretch of U.S. 23 in Pike County.

“Today was a day of bucket list checkin’ for this road dog,” Childers wrote. “Driven by this mannequin, and that road sign, since I was knee high to a grass hopper.”

He got the statue by making a donation to the Appalachian Research and Defense Fund, which provides free legal services to low-income people.

Childers signed off the post with the hashtag, eating big time, his parody of Elvis Presley’s “Taking Care of Business” mantra.

Conn started his law practice in a trailer in 1993, had portrayed himself as “Mr. Social Security.” He was well-known for his outlandish TV commercials and small-scale replicas of the Statue of Liberty and the Lincoln Memorial at his office in eastern Kentucky.

Conn represented thousands in successful claims for Social Security benefits. He came under federal scrutiny after it was discovered he bribed a doctor and a judge to get his clients approved for disability claims based on fake medical evidence. He pleaded guilty to over $500 million Social Security fraud schemes.

He was sentenced to 15 years in prison in 2016, but in June 2017 before he was to report to prison, Conn fled the U.S. and spent six months on the run before being captured at a Pizza Hut in Honduras.

Childers got his start in the Tri-State, often playing at The V Club in Huntington, West Virginia and appearing on West Virginia Radio’s Mountain Stage.

The former delivery driver for Big Sandy’s released his first album in 2011, when he was just 19 years old, but broke through with his 2017 album “Purgatory” which went to number 17 on the country charts and number three on the U.S. indie chart.

His 2019 album, “Country Squire” went to number one on the Billboard charts. He was nominated for a Best Country Solo Performance Grammy for his song, “All Your’n,” but lost to Willie Nelson and his song “Ride Me Back Home.”