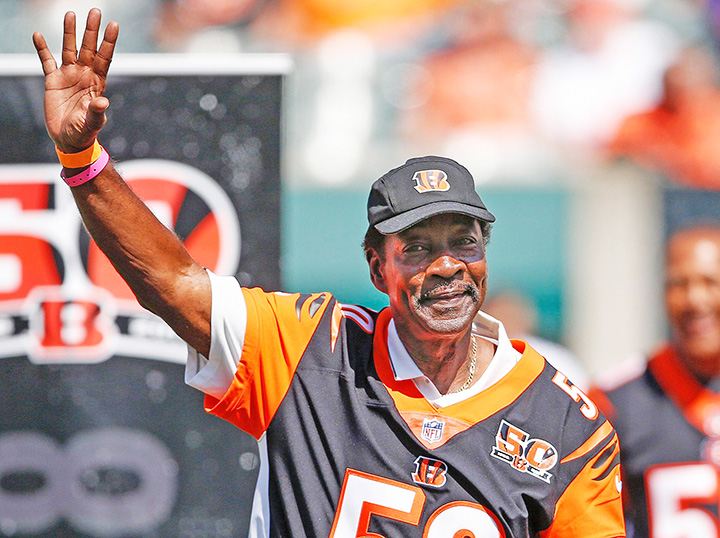 Former Cincinnati Bengals cornerback Ken Riley, seen here waving to the crowd at Paul Brown Stadium during a halftime ceremony in 2017 to mark the team’s 50th anniversary, has died at age 72. Riley’s 65 career interceptions remain the most in team history and fifth overall in NFL history. (File photo)

ST. PETERSBURG, Fla. (AP) — Ken Riley, the former Cincinnati Bengals standout who was head coach and athletic director at alma mater Florida A&M, died Sunday. He was 72.
The school announced the death, saying Riley died in his hometown of Bartow. A cause of death was not released.
Riley played 15 seasons for the Bengals as a defensive back, with 65 career interceptions — fifth in NFL history — for 596 yards and five touchdowns — all franchise records. He recovered 18 fumbles.
Before his NFL career, Riley was a four-year starter at quarterback for the Rattlers.
“FAMU athletics and the entire Rattler Nation is deeply saddened of the passing of former FAMU football player, head coach, athletics director and NFL great Ken Riley,” Vice President and Director of Athletics Kortne Gosha said in a statement. “We wish his family our deepest condolences.”
Riley, who was African American, was chosen in the sixth round of the 1969 NFL draft by the Bengals, who under coach Paul Brown decided to convert him to cornerback.
At the time, black starting quarterbacks in the NFL were all but unheard of. Riley retired in 1983.
“Everybody here loved Kenny. He had everyone’s respect,” Bengals owner Mike Brown said in a statement.
“When he came here, Kenny and Lemar Parrish had never played cornerback, and they’re the two best we’ve ever had. And we’ve had a lot of good ones. We put him over there for a decade and a half and we didn’t have to worry about it. … I’m going to miss him. He was a good guy and a solid man.”
Riley spent two seasons as an assistant with the Green Bay Packers before taking over as coach at Florida A&M, where he went 48-39-2 from 1986-93. He won two Mid-Eastern Athletic Conference titles and was a two-time MEAC coach of the year.
The three-time All-Pro selection is in the Florida A&M and Black College Football halls of fame and was one of 33 players named to the Florida High School Association All-Century Team. He played in high school at Union Academy in Bartow,
The current Rattlers coach, Willie Simmons, said Riley will be missed.
“I woke up this morning with a heavy heart as I learned of the passing of FAMU and NFL great Ken Riley,” Simmons said in a statement.
“Coach Riley was one of the first to welcome me to the ‘FAMULY’ and having him speak to our team before our first Orange and Green game is definitely at the top of my list of unforgettable moments as head coach here at FAMU.”

York bounces back from bad breaks of last season