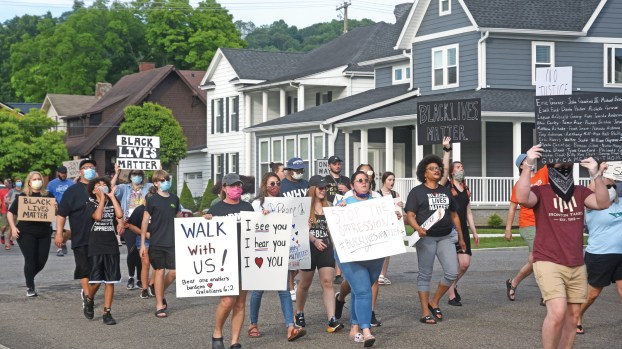 People walk down Washington Street in Ironton on Monday as part of a community march memorializing George Floyd and Guy Thomas. (The Ironton Tribune | Mark Shaffer)

Hundreds take to streets of Ironton 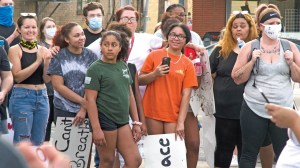 A crowd gathered behind the Ironton City Center on Monday following a community march to memorializing George Floyd and Guy Thomas. (The Ironton Tribune | Heath Harrison)

March protests police deaths, calls for change
On Monday night, a crowd of over 300 took to the streets of Ironton to protest police brutality across the nation and the death of an Ironton resident in 2008.

The crowd chanted “No justice, no peace” and “Whose streets are these? Our streets! If we don’t get it, shut it down.”

The march was organized by the family of Guy Thomas.

On March 8, 2008, the body of 45-year-old Thomas was found in the parking lot of the Ironton Police Department underneath the cruiser of officer Richard Fouts. Officials said Thomas was pronounced dead at the scene. Fouts was accused of dragging Thomas 10 blocks from near the Ninth Street playground on that snowy night.

The march on Monday followed the same path.

When the marchers got to the police parking lot, they lied face down on the ground. They yelled “I can’t breathe” and “Mama,” references to the death of George Floyd. The Minneapolis man was taken into custody by the police on suspicion of trying to use a fake $20 bill to buy a pack of cigarettes. He was handcuffed and put on the ground. A white Minneapolis police officer put his knee on the Floyd’s neck for eight minutes and 46 seconds and caused his death. A viral video of his death has led to protests against police brutality as well as marches across the country and the world.

Guy Thomas’ sister, Terri Thomas, spoke about the day she got the call her brother was dead.

“I knew one day I may get a phone call saying that my brother had died. But, when I found out how my brother left, that he was dragged. That the cop said that he did not know he was under the car? If you run over a bag in the street, you know,” she said. “I hope that man (Fouts) pays for the rest of his life.

She thanked everyone for coming out and told the Floyd family she knew what they were going through.

She thanked the City of Ironton and said she has been mad at all policemen in Ironton for a long time.

“But you can’t blame all policemen, because there are good policemen,” Thomas said. “But those who cause people pain, they need to pay for it.”

Cameron Miller pointed out to the crowd that Fouts is now the chief of police in Port Williams, Ohio.

“I don’t know if what happened sits right with you, but it doesn’t sit right with me,” he said. “So, what you, the people of Ironton, can do is call the mayor of Port Williams, blow up his Facebook page, send him an email, send him a letter, let him know that what happened in Ironton on this pavement right here is not okay.”

In May 2008, a Lawrence County grand jury chose not to indict Fouts, who by that time had resigned from the Ironton Police Department. Then-

Lawrence County prosecutor J.B. Collier said he believed the grand jury was influenced by the fact that Thomas was intoxicated at the time and that the autopsy could not determine with certainty if Thomas was dead or alive when the cruiser made contact with his body. Fouts testified he had had a hard time pulling off (from the intersection) and it was only the second day he had driven that particular car. He said he had thought his steering problems were the result of the icy conditions. A Franklin County Coroner’s Office that performed an autopsy could not conclude with certainty the exact cause of Thomas death or if he was alive or dead when the cruiser ran over him.

Ironton Mayor Sam Cramblit said they were there in solidarity “and now it is going to take our integrity to move forward. We all have to do the right thing and hold everyone accountable,” he said, adding the city wanted to hear from the people. “We want to know how you want us to go moving forward. We all want change here, but we need your help.”

April Mize said people have to be loud to be heard.

“When you are loud, you make a point, people listen,” she said. “If you are not loud and proud, you are not heard. Being silent is deadly.”

“I’m not talking just about the police, not just the racist people, I am talking about every single one of us. We need to change,” he said, adding that the older men needed to teach the younger people. “We need to get back to being a village.”

He pointed out their march just about followed the route that Fouts took back to the police station.

He said the coroner couldn’t determine a cause or time of death.

“But the people here said when they lifted the car off of him, they said he took two breaths. Two,” he said.

He said he spent 25 years teaching youth football and it wasn’t just about football, but building young men and teaching them how to be men and leaders.

“Because that is who we are counting on,” he said. “Young people take control.”

For the 18th consecutive year, IBI Group has awarded a scholarship to a high school senior toward their college tuition.... read more