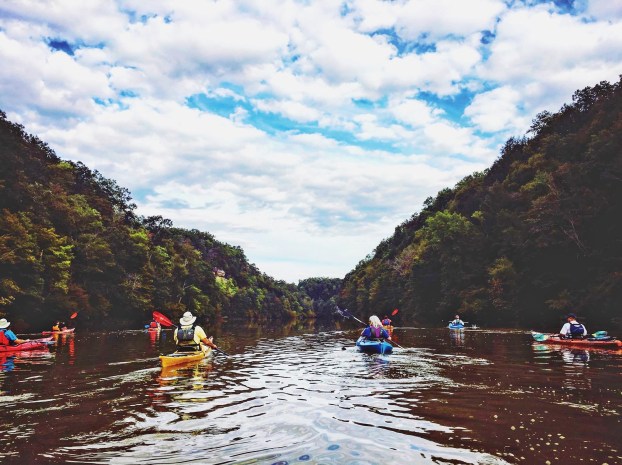 GREENUP, Ky. — Justin Matthews said that he and the staff at Dragonfly Outdoor Adventures are “passionate about getting people outside and exercising.”

The business is owned by his in-laws, Sandy and Myra Mosser, and is operated with him and his wife, Kristen Matthews.

Based on three properties along the Little Sandy River, it launched in 2014 with a kayak rental service and has since expanded to a number of offerings.

Matthews said his wife teaches aerial yoga, using parachute material swings, and they have both an indoor and outdoor space for these sessions.

“She received training down in Florida for that,” he said.

They also have an on-site food truck, which offers organic, locally produced food, such as BLTs, fried green tomatoes and fish tacos.

Matthews said the truck has gone on the road in the past, but, with the COVID-19 pandemic, they have been keeping it on site.

While they offer some activities offsite, most of their options are at their home site.

“We’re hoping to be more of a destination location and keeping a lot at Dragonfly,” he said.

Their typical season runs from May through October, but can vary slightly, depending on the weather and the river levels, while Kristen offers yoga year round, making use of the indoor facility, he said.

They have remained open during the pandemic, but Matthews said they have “Been trying to navigate” things and changed accordingly.

“We’re focusing on smaller groups of kayakers,” he said, noting that all boats and lifejackets are cleaned at the start of the day, “used once and that’s it.”

He said they ask customers to call ahead and make reservations to help.

He said he will be teaching fly fishing again in coming weeks.

“That will start up this summer,” he said.

He also said they plan to organize guided hikes and longer kayaking trips at some point.

“We’re 2.3 miles from the Ohio River,” he said. “These would be a monthly, offsite paddle.”

One change he said is coming is that they will be starting a volunteer program, to help with the operation of the business.

He said those who take part will get a free meal from the food truck, as well as a ½ day kayaking pass for each day worked.

Matthews said business has been good, with visitors coming from Cincinnati and Louisville, though he said local residents have picked up in the last year and he’s seeing more customers from Ashland, Ironton and the surrounding area now as well.

“The community is becoming more aware of what we’re doing here and we have a good mix,” he said.

For more information, visit www.dragonflyoutdoor adventures.com online, while there are separate Facebook pages available for the yoga, café and expedition parts of the business.