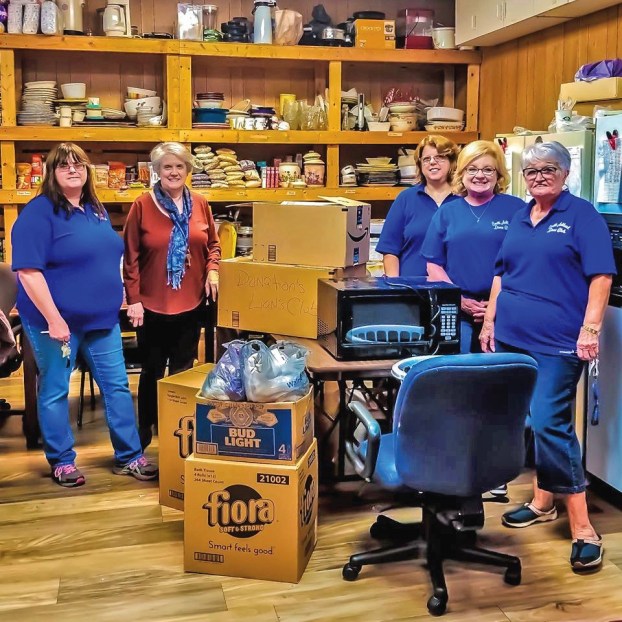 Shelter of Hope in Ashland is funded through grants and matching donations from the community, as well as in-kind donations of supplies. In October, the South Ashland Lions Club collected household goods for guests there. (Submitted photo)

“We were set up by the Ministerial Association of Churches,” Debbie Sivas, the executive director of the facility since 2008, said. “There were several churches who saw a need to provide something to homeless families.”

Sivas said the facility has a staff of three, along with two Americorps workers and a few volunteers.

They are funded through donations, as well as matching donations.

“And people do in-kind donations, with supplies like toilet paper and paper towels — things food stamps won’t cover,” she said.

Sivas said Shelter of Hope is a long-term facility, which works to get its residents into permanent housing.

“It is designed with apartments — we have 10 — with a common area and a laundry facility,” she said.

She said they review the cases of their residents every 10 days, though, since the COVID-19 pandemic, there have not been vacancies for housing and residents have been staying longer.

“We keep people in place until they get stable homes,” she said, adding that they also do case management, helping people with housing vouchers and other paperwork and processes.

She said this long-term assistance helps to alleviate the larger problem.

“They would probably become homeless again more quickly without the support,” she said. “We guide them through what they need to do.”

She said many of the people they work with have reading issue and, for others,  reading comprehension is difficult.

Staff and volunteers help them to sign up for things such as mental health addiction services.

He said they also work with the Kentucky extension office to educate them on nutrition and health.

“And how to stretch money for those services,” Sivas said.

Sivas said that the pandemic has presented a challenge for them, as it is harder to move people into housing, while they have also had to implement social distancing in their interaction, as well as reconfigure things such as how their shared laundry facility operates.

There are three homeless shelters in Ashland, also including the Salvation Army and Safe Harbor,” Sivas said. Shelter of Hope differs in that it is more long-term, but she said they work with the other two with the same goal in mind.

“We work together to get people housing,” she said.

Typically, there are several fundraising events for the shelter during the year, though Sivas said the pandemic has led to those being canceled for now.

But she pointed to one that is still scheduled.

Texas Roadhouse in Ashland will be donating a percentage of proceeds for orders from anyone who brings in a copy of the shelter’s flyer. This event is set for June 15.

Sivas said anyone wanting the flyer, as well as more information on Shelter of Hope can visit www.shelterofhope.org or visit their Facebook page.

GREENUP, Ky. — Justin Matthews said that he and the staff at Dragonfly Outdoor Adventures are “passionate about getting people... read more