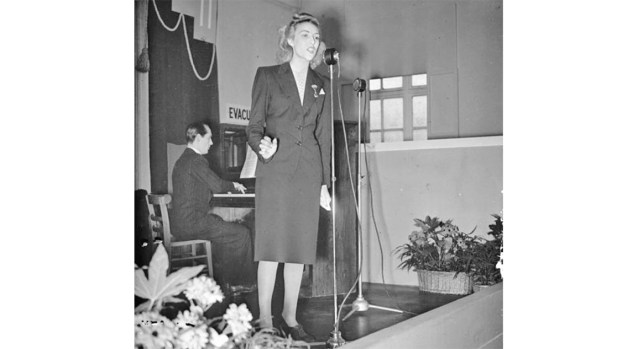 Vera Lynn sings to workers during a lunchtime concert at a munitions factory in 1941. Lynn, whose songs served as inspiration in the war and had seen renewed popularity during the COVID-19 pandemic, died Wednesday at age 103. (Public domain)

LONDON (AP) — Dame Vera Lynn, the endearingly popular “Forces’ Sweetheart” who serenaded British troops during World War II, has died at 103.
During the war and long after, Lynn got crowds singing, smiling and crying with sentimental favorites such as “We’ll Meet Again,” and “The White Cliffs of Dover.”

Lynn possessed a down-to-earth appeal, reminding servicemen of the wives and sweethearts they left behind when they went off to war.

She hosted a wildly popular BBC radio show during the war called “Sincerely Yours” in which she sent messages to British troops abroad and performed the songs they requested. The half-hour program came on during the highly coveted slot following the Sunday night news.

In September 2009, long after her retirement, Lynn topped the British album chart with a hits collection titled “We’ll Meet Again — The Very Best of Vera Lynn.” It reached No. 1, despite competition from the release of remastered Beatles’ albums.

Amid this year’s coronavirus outbreak, Lynn and opera singer Katherine Jenkins released a charity version of “We’ll Meet Again.” Once again the public found comfort in her words of hope, which resonated in the locked-down country.

In a reflection of her enduring appeal, Queen Elizabeth II also invoked the words of Lynn’s signature song as she addressed the nation in lockdown. The monarch, who served as an ambulance driver during the war, played on the song’s theme, promising that loved ones would be reunited in the end after being separated by the virus.

Lynn earned her nickname, “The Forces’ Sweetheart,” after being ranked No. 1 in a 1939 Daily Express poll that asked servicemen to name their favorite musical artists. Years later, she reflected on time spent with soldiers abroad.

“What they needed was a contact from home,” she said. “I entertained audiences from 2,000 to 6,000. And the boys would just come out of the jungle and sit there for hours waiting until we arrived and then slip back in once we’d left.”