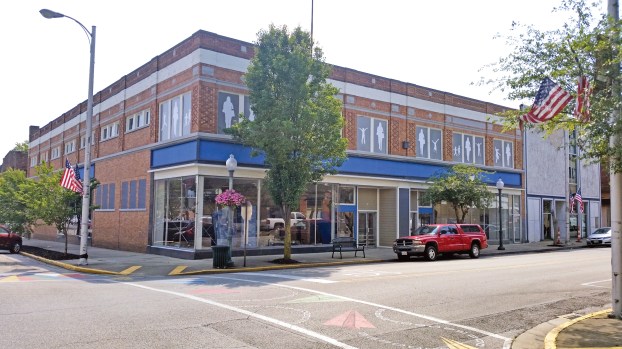 The former Kresge building at 101 S. Third St. in Ironton will be the future site of Central Furniture after being purchased by the Donohue family to expand Central Hardware & Furniture. The store is expected to open in mid-July. (The Ironton Tribune | Mark Shaffer) 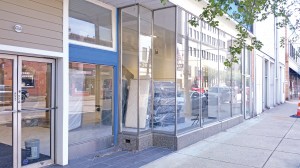 Painting scaffolding is visible in the window of the former Kresge building, which was bought by Central Hardware & Furniture store for additional retail space for furniture. (The Ironton Tribune | Mark Shaffer)

Central Hardware & Furniture continues to expand its retail space with the purchase of the old Kresge store on Third Street in downtown Ironton.

The hardware store will remain in the same building it has been in since 1950. The new location will be used for furniture sales, as is the building next door to Central Hardware & Furniture that owner Rich Donohue bought last year.

“The hardware store has grown so much that we need more room,” he said. “Last November, we opened up the furniture part in the old Meran’s building next door. The problem is we just need more space.”

Donohue, the president of Central Hardware & Furniture, said it is a great time for the long-time Ironton business. They had plans in the works for expanding the business for a couple of years now.

“This is an exciting time for us,” he said. “With the addition of the S.S. Kresge building, it allows us to have all our retail on the first floor for the first time in the history of the company.”

Central Hardware will remain in its building and the Kresge building will be Central Furniture.

They hope to have the furniture store open to the public in mid-July.

Donohue said the hardware store is a different store than when he bought it four years ago.

“We’re just investing in it and the shelves are full. We need more shelving for the hardware,” Donohue said.

The S.S. Kresge building was renovated by the Lawrence County Economic Development Corporation last year. A few years ago, the space was used as a Dollar General store.

Right now, painters are painting and some furniture wrapped in plastic is visible from the street.

Donohue said there are two floors that will be available, each with 12,000 feet of space, once the 70-year-old freight elevator is up to code.

“We’ve got to get everything right with the State of Ohio and the good news is that we will be able to get in back in operation,” he said. “Not sure of the time frame for that, but we are working on it right now.”

Until the elevator is in operation, they will be sticking with the first floor.

Dealing with multiple floors is nothing new for Central Hardware & Furniture, where the hardware store was always on the first floor and retail space for furniture was on the upper floors of the building.

“The second, third and fourth floors of the hardware building have furniture, dinettes, bedroom suites and so forth,” Donohue said. “The first floor of the Meran’s building is furniture- sofas and sectionals and chairs.”

The change does not affect the structure of the company, only differentiating retail categories within Central Hardware & Furniture Inc.

“This move sets us up for the future,” said Central Hardware & Furniture vice president Chris Donohue said. “This allows us to expand both hardware and furniture divisions of the company, while branding it in such a way that will allow for future expansion in other locations down the road”.

Central Hardware is one of the oldest businesses in Ironton, opening for business in 1909. The building was constructed in 1871 and survived the 1937 flood that covered much of downtown Ironton. Roy Ratliff bought the business in 1950 and ran it until the Donohue family bought it in 2016.

Event will run from July 14-16 ROME TOWNSHIP — When it was announced in May that the Lawrence County Fair... read more