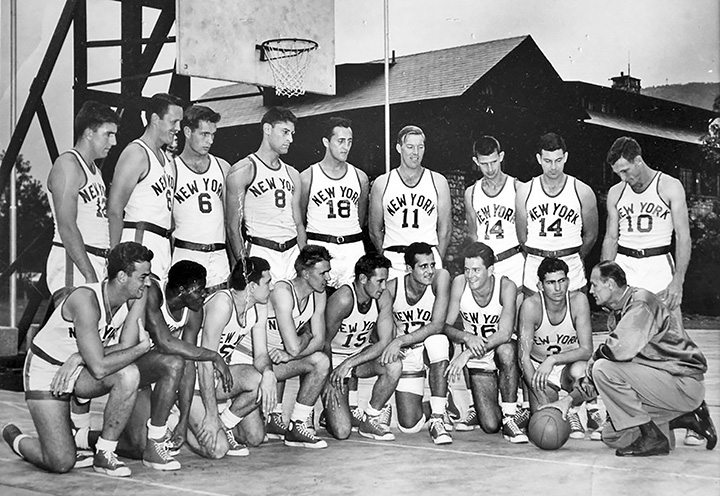 Gene James began in Ironton, made his name in nearby cities, reached bigger heights and then came home.
The 6-foot-4 James was born in Ironton but moved to Charleston, W.Va., where he played for Stonewall Jackson High School.
He played for Marshall from 1942-43 and 1946-48. He was a starter for the 1947 NAIB national championship team and was an NAIB first team All-American in 1947 and Associated Press honorable mention in 1948.
NAIB is known today as the NAIA.
Nicknamed “Goose,” James was the Herd center on the national championship team and was their top rebounder.
It was 1971 when James was selected on the Marshall All-Time Basketball Team.
James was a starter in the lineup coached by the legendary Cam Henderson whom the Herd basketball arena is named in his honor.
James, Bill Toothman, Andy Tonkovich, Johnny Wellman, Bill Hall, Marvin Gutshall and coach Henderson are members of the Marshall Athletic Hall of Fame.
Marshall began the season 17-0 and its home winning streak reached 35 straight until falling to the University of Cincinnati.
Marshall beat Xavier, Creighton, Dayton, Louisville and Hawaii along the way. The losses were to Cincinnati twice, Miami, Ohio, Evansville and Bradley. Four of those losses were on the road.
James played in the NBA for the New York Knicks from 1949-50 and the Baltimore Bullets (now the Wizards) from 1950-51. The Knicks were part of the NBA playoffs in both seasons James played for the team.
James averaged 3.4 points and 2.9 rebounds per game. He played in 88 regular season games and four playoff games. His best season was his final year when he played in 42 games, averaged 3.3 rebounds and 4.7 points a game.
James returned to Ironton after his playing days and served as the most successful Ironton Recreation Director during a period of its highest participation from age five to adult.
James — who was born Feb. 25, 1925 — died at the age of 72 in Sarasota, Fla. Gene and his wife Pat had a son Richard “Dickie” James who was an all-district and All-Ohio basketball standout for Ironton on its 1979 regional finalist team. Their son Danny was a stellar tennis player.
———
NOTE: Ironton’s Ralph Snead played minor league professional basketball. In overseas professional leagues, Ty Barnes played in Australia while Zac Carter has played in Iceland and New Zealand and is headed for Mexico for the upcoming season.
Carter is Ironton’s all-time leading scorer and Barnes holds the single-game record with 51 points in which he hit a school record seven 3-point goals. Snead held the previous record with 45.