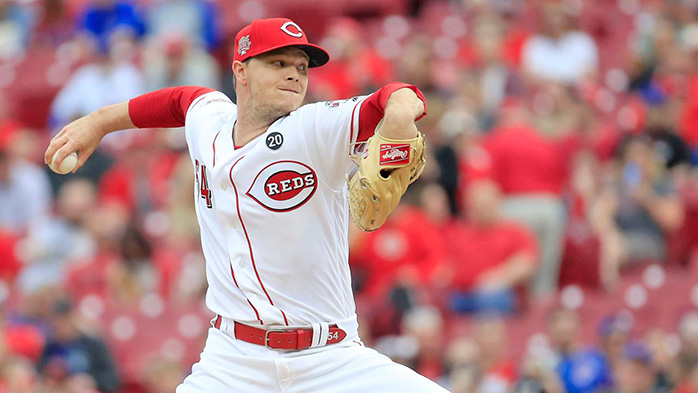 Sonny Gray has been named the Opening Day starting pitcher for the Cincinnati Reds for the 2020 season.

CINCINNATI (AP) — Sonny Gray knows what it’s like to start a season opener in front of a crowd, having done it twice with Oakland. His third time will be the most different and memorable of all.
Cincinnati Reds manager David Bell chose Gray to start the 60-game season and lead a rotation that he joined only last year.
Bell announced Wednesday that Luis Castillo — last year’s opening day starter — would be second in the rotation, followed by Trevor Bauer, left-hander Wade Miley and Anthony DeSclafani.
Gray started openers for the Athletics in 2014 and 2015, throwing a combined 14 shutout innings while getting a win and a no-decision. He’s in line to face the Detroit Tigers at Great American Ball Park on July 24 as Major League Baseball starts a season shortened because of the pandemic.
“It’s going to be an important day,” Gray said Wednesday before practice. “Baseball will be back, and it will be back in some of the weirdest and craziest circumstances.
“When you look back on this in 20 or 30 years, everybody will remember 2020.”
The Reds acquired Gray from the Yankees before the 2019 season. He became an All-Star for the second time, going 11-8 with a 2.87 ERA. Gray hasn’t allowed more than six hits in any of his last 33 starts, the longest such streak in major league history.
Bell chose Gray over Castillo based upon the pitchers’ readiness and the match-ups to start the season. Both pitchers were All-Stars last season and will anchor a rotation that was improved by the off-season addition of Miley.
“It tells the story right there,” Bell said. “When you have Luis Castillo and Trevor Bauer and Wade Miley and Anthony DeSclafani — who made great strides last year — and none of those guys is the opening day starter, it says a lot.”
Gray worked out in Tennessee after spring training was called off. He expects to throw 65-70 pitches during a workout Thursday at Great American Ball Park as he builds toward the opener.
Bauer was Cincinnati’s most outspoken player during negotiations between MLB and the players’ union over a shortened season, repeatedly criticizing Commissioner Rob Manfred’s handling of the situation.
Bauer now is focused on getting ready for a shortened season that won’t necessarily play to his strengths. He made 34 starts last season, tied for the major league lead.
“My skill set is built for a long season — I’m super durable and I train for that way,” Bauer said. “I’m not as good (in) a sprint because I haven’t built myself that way. I spent the last three months building myself more for this sprint.”
Bauer made 10 starts for the Reds after a trade with Cleveland in July, going 2-5 with a 6.39 ERA with Cincinnati. He’s encouraged by his offseason work.
“I’m in a better place than I’ve ever been,” Bauer said. “I feel perfectly healthy and fantastic.”