Best defensive players OSU has faced in the past 3 decades 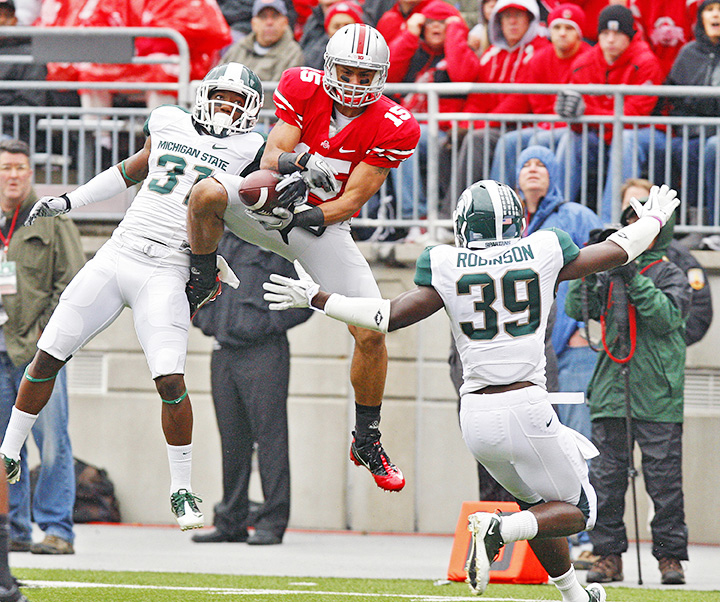 Ohio State wide receiver Devin Smith (15) makes the catch but loses the ball to Michigan State cornerback Darqueze Dennard (31) for an interception in the second half at Ohio Stadium in 2011. Michigan State pulled out a 10-7 win. (Kyle Robertson/Columbus Dispatch/MCT)

When the Big Ten Network announced its All-Decade team last week it reminded me how many great players I have seen play against Ohio State in writing about OSU football since 1992.
So, I decided to make a list of the best players I’ve seen at each position based on how they played when they competed against Ohio State and on their overall careers. Call it my All-Opponents All-Three Decades Team.
The No. 1 requirement was that they had to have been a starter in a game against Ohio State, which eliminated great players like Pat Fitzgerald and Dallas Clark. No. 2 was that I had to have been in the press box when they played against OSU.
Here’s my defensive selections::
DEFENSIVE LINEMEN
1. Khalil Mack (Buffalo). 2. Ryan Kerrigan (Purdue). 3. J.J. Watt (Wisconsin). 4. Andre Wadsworth (Florida State). 5. Clelin Ferrell (Clemson).
Honorable mention: Vince Wilfork (Miami), Courtney Brown (Penn State), Erasmus James (Wisconsin).
Mack played only one year of high school football and ended up at Buffalo, a Mid-American Conference school, so there was not a lot of hype about him when Ohio State opened the 2013 season against Buffalo.
With nine tackles, 2.5 sacks and a pass interception as a defensive end/outside linebacker he changed a lot of perceptions that day.
Kerrigan had 13 sacks in 2009 and 12.5 of them in 2010. He had three sacks in Purdue’s upset of OSU in 2009 and six overall in three games against the Buckeyes.
Watt, who transferred to Wisconsin from Central Michigan, had 36.5 tackles for losses and 11.5 sacks in two season with the Badgers in 2009 and 2010.
His best game against Ohio State was in a 31-18 Wisconsin win in 2010 when he had two sacks and three tackles for losses.
When Ohio State played Florida State in the Sugar Bowl in the 1997 season, the Seminoles had six sacks, led by Wadsworth, who had two sacks and an interception.
Ferrell, a sophomore, had a sack and 3 tackles for losses when Clemson’s defensive front dominated OSU in a 31-0 College Football Playoff semifinal in the 2016 season.
LINEBACKERS
1. Dana Howard (Illinois). 2. Tamba Hali (Penn State). 3. Jonathan Vilma (Miami). 4. Chris Borland (Wisconsin). 5. LaVar Arrington (Penn State).
Honorable mention: Simeon Rice (Illinois), Clay Matthews III (USC), Devin Bush (Michigan), Kevin Hardy (Illinois), Chad Greenway (Iowa), Brian Cushing (USC), Paul Posluszny (Penn State), Brian Orakpo (Texas).
Howard’s Illinois teammates Simeon Rice and Kevin Hardy were more highly regarded in college and had better NFL careers but no linebacker in the Big Ten tormented Ohio State more in the early 1990s than Howard. He had 15 tackles in an Illinois win in 1992, 13 tackles in an OSU win in 1993 and 14 tackles and two sacks in an Illinois win in 1994.
Hali is one of many great Penn State linebackers but he stands out for 11 sacks in 2005, including a strip sack of Troy Smith that ended any chance Ohio State had of winning that game or competing for a national championship. Vilma led Miami in tackles three seasons in a row and led the Hurricanes with 14 tackles against Ohio State in the 2002 national championship game.
Borland had more than 100 tackles three seasons in a row from 2011-2013. He had 13 against OSU in 2011 and 16 in 2013. Arrington was one of the most athletic linebackers in Big Ten history. He had three sacks in a 23-10 Penn State win over OSU in 1999 and 11 tackles and a sack in a 28-9 win by the Buckeyes in 1998.
DEFENSIVE BACKS
1. Charles Woodson (Michigan). 2. Jamar Fletcher (Wisconsin). 3. Sean Taylor (Taylor). 4. Darqueze Dennard (Michigan State). 5. Ty Law (Michigan).
Honorable mention: Lawyer Milloy (Washington), Jabrill Peppers (Michigan), Desmond King (Iowa).
Woodson is the only defensive player to win the Heisman and had a big impact all three times he played against Ohio State.
In a 31-23 Michigan win in 1995 he had two interceptions. The next year he had nine tackles, two pass break-ups and a tackle for a loss in a 13-9 Michigan win. In 1997, when Michigan won 20-14, he had an interception, returned a punt 78 yards for a touchdown and caught a pass for 37 yards.
Fletcher intercepted seven passes each of the three years he played at Wisconsin from 1998-2000 and was All-Big Ten three times and an All-American two years. He had an interception in 2000 in the only time he played against Ohio State.
Taylor had two interceptions against Ohio State in the national championship game in 2002 and had 10 more for the Hurricanes in 2003. Dennard was the leader of Michigan State’s 2013 secondary, which was called The No Fly Zone. That group was a big reason OSU lost to the Spartans in the 2013 Big Ten championship game.
Law had two interceptions in Michigan’s 28-0 win over Ohio State in 1993 and 10 tackles in a 13-13 tie in 1992 before having a 15-year career in the NFL.

CLEVELAND (AP) — The Cleveland Browns are closing in on a contract extension with star defensive end Myles Garrett, a... read more