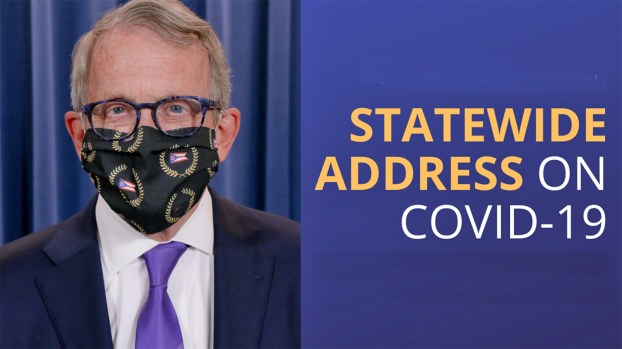 DeWine urges, but does not mandate, mask use statewide

Although many had speculated it would take place, the governor issued no new health mandates for the state.

Instead, DeWine urged residents to wear masks whenever in public.

“I’m asking each of you, wherever you live, to wear a mask every time you go out,” he said. “If we did this for four to six weeks, we could drive this epidemic into the ground.”

DeWine commended Ohioans for their actions during the shutdown and said they had flattened the curve, but he said cases are spiking, particularly in the Dayton and Cincinnati areas.

The governor also said that caution must still remain high.

But he said if residents do not take action and follow the guidelines, then it will be in the same situation as Florida and Arizona, where cases have spiked dramatically.

“That could be our future,” he said.

Citing science and data, DeWine reminded Ohioans about the efficacy of facial coverings to protect themselves and others. He also renewed the call to socially distance and limit public gatherings.

“Is that family reunion worth it if grandma tests positive?” he said. “Was that cookout worth it, if your neighbor ends up on a ventilator?”

He said the trend shows, unless there is a change, the state is “sliding down a dangerous path” and that the virus “is spreading with a vengeance in all 88 of our counties.”

Earlier this week, the state unveiled its color-coded, four-level alert system for Ohio counties. Last week, those designated as Red Level Three were mandated to use facial coverings and masks. No counties have been designated as the highest alert, Level Four. The alert system is updated each Thursday.

Where the money went: Data shows top recipients of PPP loans for Tri-State

A number of businesses around the Tri-State applied for and received Paycheck Protection Program loans, part of the federal government’s... read more