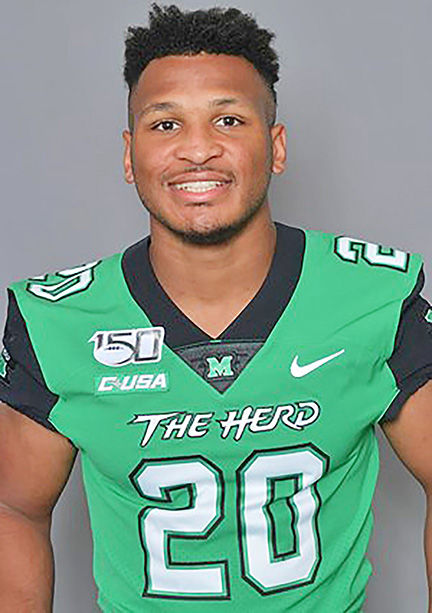 HUNTINGTON, W.Va. –Marshall running back Brenden Knox has been named to the Doak Walker Award Watch List, the PwC SMU Athletic Forum announced Wednesday.
The junior has picked up a slew of preseason awards on the heels of a 2019 campaign that saw him earn Conference USA Most Valuable Player, Marshall team MVP and offensive MVP honors.
Last year, he amassed a league-high 1,387 yards and 11 touchdowns on 270 carries (also tops in C-USA). He also caught 14 passes for 129 yards. His rushing yardage total also ranked third nationally among sophomores.
Based on 2019 statistics, Knox will enter the 2020 season as the sixth-leading rusher in college football behind the likes of Oklahoma State’s Chuba Hubbard and Clemson’s Travis Etienne.
At 1,965 career rushing yards through two seasons, he ranks as the third-best two-season start to a career through a sophomore season for Marshall running backs behind Chris Parker and Doug Chapman.
In the last two months, Knox has also been named first-team preseason all-conference by Athlon and Phil Steele, while earning a spot on College Football America Yearbook’s Group of 5 starting lineup.
The PwC SMU Athletic Forum Board of Directors will name ten semifinalists in November, and three finalists, as voted on by the Doak Walker Award National Selection Committee, will be announced in November.
The committee will cast a second vote in December to determine the recipient. The National Selection Committee consists of past recipients, former NFL All-Pro and college All-America running backs, media members and selected special representatives.
The recipient of the 2020 Doak Walker Award will be announced live on The Home Depot College Football Awards.

Jim Walker jim.walker@irontontribune.com Could vitamin D be the kryptonite to the coronavirus and the bullpen relief to keep sports playing?... read more