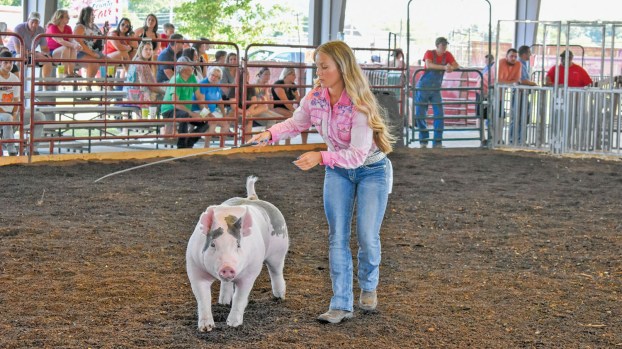 Livestock event proves the show must go on 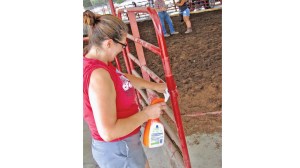 By Austin Johnson and Taylor Burnette

The event, organized by fair parents Carrie Cheek and Rob Calaway, was an independent event, put together after the Lawrence County Fair was canceled due to the COVID-19 pandemic.

The fair board had considered hosting a junior fair with 4-H events, but ultimately voted against it, as there were no grandstand events to make it financially feasible. 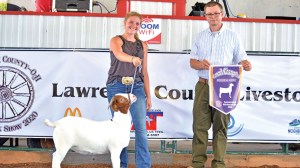 This week’s event was not a part of Lawrence County 4-H or the fair board’s events, but featured many families who are regulars at the fair.

Participation was smaller than the fair, as many families had sold their animals after the announcement of the fair’s cancellation.

This week’s show had enough participants to feature competitions in the cattle, rabbit, goat, lamb, chicken and hog categories.

On Tuesday, the youth came together to show lambs and goats in the main barn at the fairgrounds.

“I love showing,” Lily Schneider, grand champion in breeding lambs, said. “I was really disappointed there wasn’t going to be a fair, but when they said there was gonna be a show, I got excited.”

Schneider says to get her animals prepared for the livestock show. She has to feed and water them every day and has to work them every day.”

“COVID-19 has made it a lot easier actually, without having school and sports,” she said. “I’ve had more time to spend with my animals.” 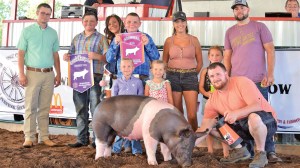 Eli Wileman, a first-time participant, landed himself in second place in that event, following Schneider.

Eli says he was there to “show lambs and just have fun.” He loves animals and feels great about coming in second, he said.

Colt Pancake, finishing in third, said “We practice a lot, use a lot of time out of our day, and help with each other’s animals.”

This competition was judged by Zach Bartensalger. He said he looks for animals that are “going to look like they can go back into production.”

Bartensalgar said for females, specifically, he looks for “maternal type traits,” such as body flesh and structural integrity.

He also stated that this is a teachable moment as well, saying the kids learn what hard work and responsibility really is.

“There’s a lot of us here that this was going to be our last 4-H year,” Maddy Calaway, who was set to show cattle on Thursday and went on to win in two categories, said. “So we came and brought our animals, anyway, because this is our last go-around. This is our last time that we get to walk in that ring and show off our animal to that judge.”

Everyone really wants to bring home that purple banner, she said. 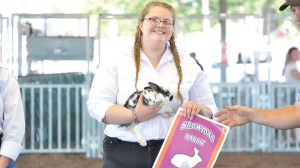 The event was staffed by volunteers, comprised mostly of families who regularly participate in the fair and 4-H programs.

Around 100 people gathered on Wednesday to view the showing of this year’s hogs.

Nearly 30 hogs were shown, with many participants showing multiple animals to the judge.

Despite the 90-degree heat of the day, participant Jaxon Gates said he felt very good after showing his hog, Bullet. He really enjoyed the event, Gates said.
Many spectators ate ice cream and sipped lemonade, enjoying the atmosphere of such a large event.

The crowds gathered on both sets of bleachers, very few were wearing masks or seating by social distancing, to watch the showings. Handwashing stations were set up and volunteers sanitized the facilities.

The fair board has said it hopes senior and junior fair events will be able to return for summer 2021.

— For more photos from the show, see the Focus pages in the July 18 weekend edition and the Wednesday, July 22 Tribune, or go to our Facebook page

Held in place of the canceled Lawrence County Fair, the independent event allowed young famers to show their animals to judges in multiple categories.

Organizer Carrie Cheek said donations collected from sponsors made it possible for them to give the youth exhibitors $13,800 total in premiums.