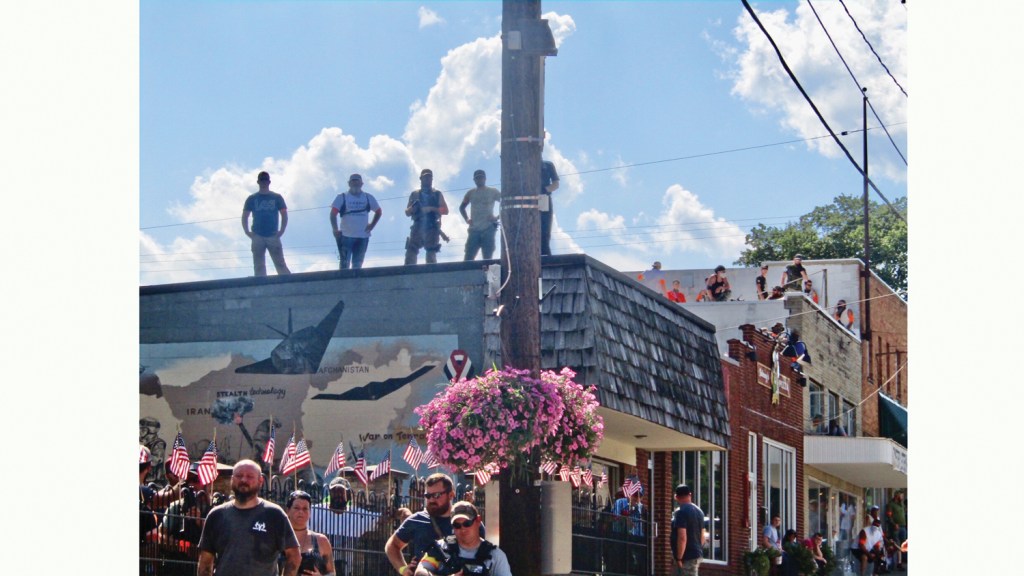 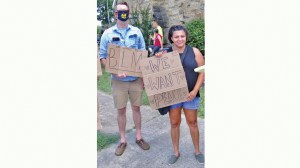 Jamie Baker was one those marching in the Black Lives Matter event in Grayson, Kentucky on Sunday. (For The Ironton Tribune | Austin Johnson)

Editor’s note: The following is an account by Austin Johnson, a Marshall University student who is interning for The Tribune, of the events in Grayson over the weekend surrounding a Black Lives Matter protest. Due to the nature of the story, we are presenting his experience as a first-person narrative.

GRAYSON, Ky. — A small Black Lives Matter protest in Grayson, Kentucky was met with an armed militia that consisted of Americans in and out of the state of Kentucky.

About two dozen Black Lives Matter protesters marched up and down Main Street in Grayson chanting, “When Black lives are under attack, what do we do? Stand up, fight back” and “No Justice, No peace.”

One protestor felt inspired and compelled to eradicate racism because of what her grandmother went through.

“My grandmother used to talk about stories of marching — being beaten and assaulted,” Jamie Baker said. “All lives matter. Yes, but all lives can’t matter until Black lives matter.”

Baker says she was not intimidated by the armed militia “I’m not scared, I’m walking with purpose today, this is time for a change.”

Meanwhile, standing in 90 degree heat, I followed the demonstrators up and down Main Street.

As the march made its way down the road, a few Confederate flags were seen flying in the distance behind the protesters.

Residents of Grayson and members of the armed group lined the streets with rifles and handguns. Some stood on roofs of buildings with guns aimed at demonstrators.

As I continued my way down the road, entering the “patriot’s zone,” confrontation was met between both groups. I witnessed individuals yell out racial slurs to people of color protesting and I had a man call me a “n—-r” myself. —In fact, his exact words were — “N—-r! Get out of here! N—-r.”

It felt like an old documentary and it reminded me of the 1960s. Seeing “the look” bystanders were giving, it was bone chilling. I am really shocked at what I have witnessed and faced. 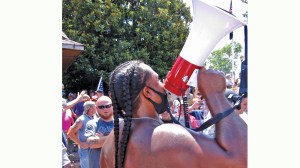 The protesters took several laps through Main Street and Ruppert Lane, chanting —but were drowned out multiple times by the counterdemonstrators shouting “Make America great again” and chanting “USA.”

As I walked up to the armed members, who said they were there to “protect the city,” I was treated as if I was affiliated with the Black Lives Matter group. Some members even threatened to attack me and take my camera away. After walking the streets of a small town, speaking with dozens and explaining to some that I’m here to document and ask questions, some attitudes shifted, but others did not.

There had been claims circulating online before the protest that besides the Black Lives Matter group, there were going to be a lot of buses carrying members of the Black Panthers and the notorious street gangs, The Crips and The Bloods. No one affiliated with those groups showed up.

After questioning multiple people affiliated with the armed patriots, most say they made an appearance “to protect their city” from an organization called NFAC, who failed to make an appearance.

The NFAC is a group that counter-protesters say threatened “to burn down and loot Grayson.”

“I am here to protect our communities from being burned down and destroyed,” said a man who did not want to be identified.

Keep in mind, the only thing that was destroyed during the protest was a microphone speaker box that a counter-protester smashed on the pavement.

Someone also stole a truck belonging to one the Black Lives Matter members. It was later recovered by the Kentucky State Police. 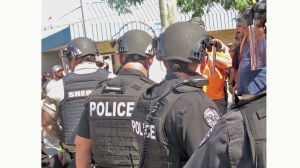 Police were on hand as Grayson, Kentucky was filled supporters of a Black Lives Matter march and counter demonstrators on Sunday. (For The Ironton Tribune | Austin Johnson)

The man that I spoke with told me the killing of George Floyd was justifiable and that “accidents happen.”

Continuing with his message of “you are causing the problems,” I clarified that I was there to document what’s going on and had no affiliation with the protest that took place on Sunday.

As time passed by, and people on both sides started to disperse, an armed member began to yell into the air, “Patriots, our time is done here for today.”

A few of the counter protesters offered me food and water. Some even apologized for the way I was treated and wanted to assure me that everybody in Grayson is not racist, but was drowned out by the reckless behavior from their peers and family.

Another protest is planned for Grayson this Sunday.