Carrico on watch list for Player of the Year 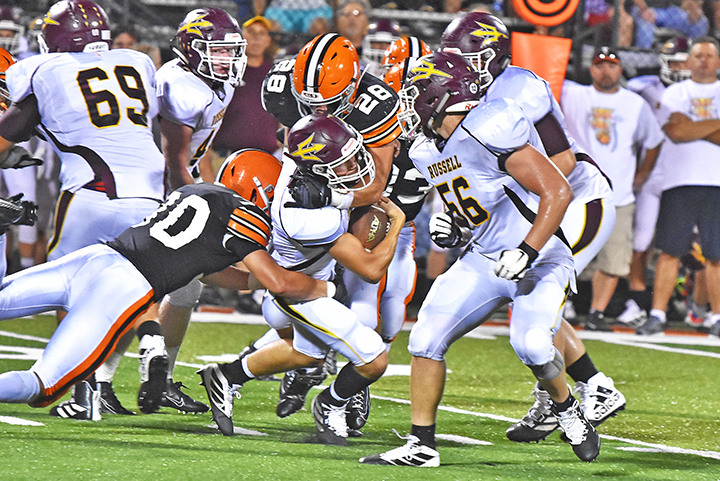 Ironton senior linebacker and running back Reid Carrico (24) is on the Sports Illustrated list for Player of the Year. (Kent Sanborn of SouthernOhioSportsPhotos.com)

Reid Carrico made the list.
This particular list is a good one, though. The Ironton Fighting Tigers’ senior linebacker and running back who has committed to Ohio State is one of 37 players from Ohio on the Sports Illustrated All-American football team watch list.
Carrico is one of 1,000 players from across the nation who have been selected to the watch list.
The Ohio total is seventh-most from a single state behind Florida with 142, Texas 130, Georgia 84, California 79, North Carolina 55 and Alabama with 44. Virginia and Michigan with 30 each and Maryland with 28 round out the top 10.
The 6-foot-3, 220-pound Carrico is one of only two players from Southeastern Ohio to make the list. The Under Armour All-American Game selection is joined by Jackson tight end Treylon Davis (6-5, 215).
Carrico’s scouting evaluation was made available by SI:
Prospect: Reid Carrico
Status: SI All-American Candidate
Vitals: 6-foot-3, 220 pounds
Position: Running Back, Linebacker
School: Ironton High School, Ironton, Ohio
Committed to: Ohio State
Projected Position: Mike Linebacker
Frame: Tall with broad shoulders and some length in arms. Tight torso and waist with athletic lower half. Has room to carve and chisel his body.
Athleticism: Displays good change of direction to weave and squeeze A-gap and B-gap runs. Very good range from second level to reach box edges and perimeter with ease. Beats blockers laterally and can easily cross faces. Has balance to get over trash. Excellent speed and closing quickness. Arrives with forceful intent and thump at collision points on ball-carriers.
Instincts: Can click and close with a very good feel for flow versus run. Solid ability to read cross keys to mesh points through traffic. Takes good pursuit angles and can backdoor blockers. Assertive and decisive to squeeze line and insert in gaps. Syncs with snap with late declaration as a blitzer. Decent and capable of disrupting passing lanes in coverage from MOF.
Polish: Mainly plays Mike ‘backer with outstanding motor. Used mostly in blitz packages and as a hug player versus pass. Needs to continue improving hand usage at the point in take-on and shed phase versus blockers. High hat at times versus pass. Must continue to develop zone eyes and show he can relate to 2 and 3 in zone concepts. Must show he can match and copy running backs and tight ends in man concepts.
Bottom Line: Carrico has outstanding toughness and physicality, to go along with his good play speed and range. He works as a decisive middle linebacker who takes good pursuit angles with good play speed versus the run. While he must show he can do more than spy, hug and blitz, Carrico does have athletic traits to develop in pass coverage. He fits best as a Mike ‘backer in an attacking single-gap defense with a 4-3 base alignment.