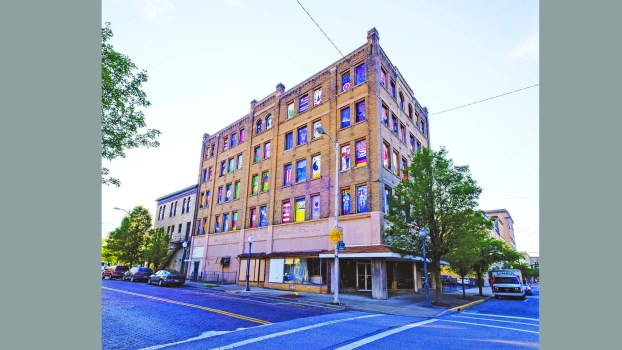 The building gets its name from A.J Brumberg, who started selling clothing in Ironton in 1881, had the building built in 1906. (The Ironton Tribune | Jeremy Holtzapfel)

Crews fixing brickwork before tackling inside

The decade-long work effort to fix up the century-old Brumberg building on the corner of South Third and Vernon streets in downtown Ironton got a boost when funding came through this year and the Ironton-Lawrence County Community Action Organization could put the project out to bid.

Ralph Kline, CAO assistant executive director, has been working towards turning the five-story building into a combination of affordable condominium-style housing on the top four floors and using the ground floor for retail or office space.

The start towards that goal was getting money to put a new roof on the building, rebuild the brick façade and repair an elevator that is shared with the adjoining Berg building on South Second Street, which currently houses a café and the Transit Center for the TTA-Ohio bus depot.

Mullins Construction, of Wheelersburg, was the winning bidder on the project.

“They’ve started working on the building,” Kline said. “What you’re seeing now is that they are doing some exterior repair on the upper parapets and things on the side by the parking lot. He has to do a lot of structural repair on the inside.”

Kline said crews will start on the first floor and work their way up with the final step being the roof repair.

“And we also have money to do the window replacements throughout the whole building,” he said.

The project could take up to six months, depending on the weather.

The ultimate goal is to turn the building into living spaces for downtown resident. The condo project, called Ironton Lofts, would feature two bedroom apartments and includes the upper two floors of the three-story Berg building as well. The two buildings share some utilities, which helps lower overall costs. They are looking at some financing plans to come through to begin the Ironton Lofts,
“So, hopefully, that will be our gift to the community in 2021,” Kline said. “And, hopefully, we will be able to pre-sell the loft units.”

It has been a long haul for the CAO to get to the point of working on the building. The CAO bought the Brumberg building in 2009 after the Guy family moved Guy’s Floor Covering from downtown Ironton to a newly-built building at 3501 S. Third St. Around that time was an economic downturn, but the CAO continued to apply for grants.

Two years ago, the 72 windows in the building were covered with art done by 133 students in a project coordinated by Ironton High School art teacher Caitlin Knore. The CAO donated the plywood panels painted by the students in time for the 150th Ironton-Lawrence County Memorial Day Parade.

The building gets its name from A.J Brumberg, who started selling clothing in Ironton in 1881, had the building built in 1906. Vernon Street was the edge of the downtown business district and Brumberg had the idea that businesses would eventually expand in that direction. In 1932, the A. J. Brumberg Clothing Company moved into the building after being in three previous locations.

COLUMBUS — Ohio unemployment claimants would receive $300 in federal weekly unemployment assistance under an option provided by the White... read more