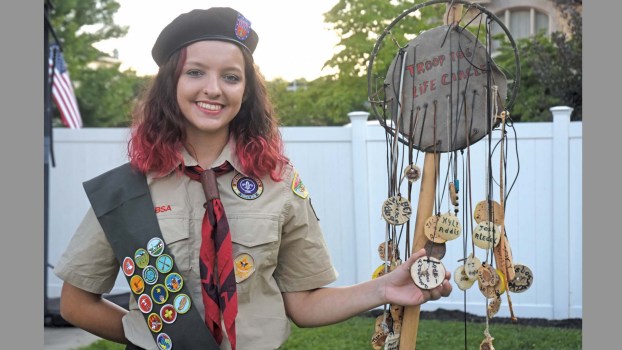 Sami Anderson holds the medallion with her name on it after hanging alongside others from BSA Troop 106 who have attained the ranking of Life Scout. (The Ironton Tribune | Heath Harrison)

It’s been a little over a year since the Boy Scouts of America changed their policy to allow girls to join in separate, gender specific groups.

And following that move, BSA Troop 106, of Ironton, became made up of two troops, 6106 for boys, and 7106 for girls. They are the only troop in Lawrence County, so far, to make this change.

Larry Anderson, assistant scoutmaster for the troop, said the Boy Scouts had allowed girls to join, since their founding, as Venture Scouts, but this change was made so they can earn the rank of Eagle Scout as boys do.

And on Monday, one girl in the troop was honored as she became one step closer to doing that.

The daughter of Cindy and Larry Anderson, she is the senior patrol leader for 7106 and has been active in scouting for three years. Her attaining of

Life follows that of her twin brother, Ben, who earned the rank a month ago. He serves as senior patrol leader for 6106 and has been involved in scouting for 10 years. The two could be seen in this year’s Ironton-Lawrence Memorial Day Parade, where they led Division 1 in the event, which was scaled down due to the COVID-19 pandemic.

Ben said he was “very proud” of his sister on Monday.

Sami said to get to the Life rank, she had to go through many other ranks and obtain merit badges.

As Life Scouts, the Andersons will now be able to begin working on their Eagle Scout projects. Eagle is the highest rank attainable in the scouting program. It was created in 1911 and only four percent of scouts have earned the honor.

David Lucas, scoutmaster for 106, said Sami is the first female in Lawrence County to reach Life and, as far as he knows, the first in the region to do so.

“It’s a momentous occasion and we’re very excited,” he said. “This is a highly-valued moment to me as scoutmaster.”

Prior to the ceremony, Sami met with the board of review, who approved the distinction.

Then, following presentation of colors and a prayer by Father David Huffman, Sami hung a wooden medallion with her name on it next to others from the troop who have attained the Life rank.

Monday’s event, which was socially-distanced and took place at the Anderson’s home, also served as a review for a member of the troop who is working toward Eagle Scout.

Brandon Blizzard, 19, met with the board of review, who looked over materials regarding his work.

The son of Brian Blizzard and Jen Buffington, he recently completed his project, planting 45 trees on the Lawrence County Economic Development property.

Lucas said that this was part of a fulfillment to EPA rules where trees must be replaced after bulldozing was done on the site.

Before attaining Eagle Scout, Blizzard will also have to meet with the district board of review in Portsmouth.

Anderson said there are currently six boys and five girls active in Troop 106, which covers ages 11 through 18. He said members come from Ironton,

Portsmouth and Rock Hill. There are also four Webelos, younger than fifth grade, he said.

He also pointed out that the troop has the only female bugler that he is aware of, Terryann Blizzard.

Lucas said that Troop 106, which has been around for 75 years, is “faithful and always working for the community.”

“It’s a great troop, a traditional troop that the community can count on,” he said.

He was confident Blizzard and the Andersons will attain Eagle Scout.

“I think The Tribune and Father Huffman will be called back soon for another celebration,” he said.

Crews fixing brickwork before tackling inside The decade-long work effort to fix up the century-old Brumberg building on the corner... read more