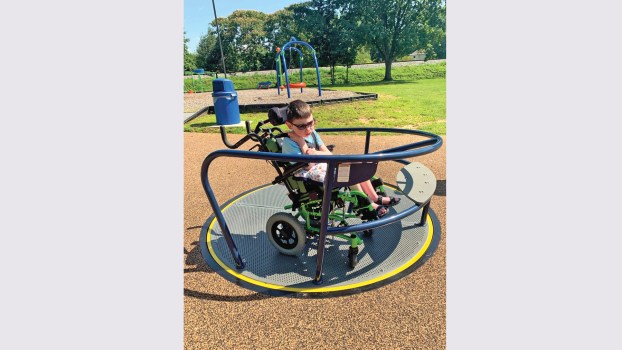 Tanner, 10, rides the new merry-go-round in the playground at South Point’s village park. The handicapped-accessible piece of equipment was installed in the spring. (Submitted photo)

Including everyone — New South Point merry-go-round is handicapped-accessible

SOUTH POINT — A new piece of playground equipment was installed earlier this year in the village of South Point’s park and Mayor Jeff Gaskin said it is get use for its specialized purpose.

The merry-go-round was funded mostly with money from the auction of a seized car that belonged to a drug dealer, he said.

Overall, the piece cost $25,000, of which $15,000 came from the auction. The remainder of the cost was paid for by a donation from People for the Point and money from the village’s general fund.

Gaskin said the piece was installed early in the spring, but the village did not announce it, due to restrictions from the COVID-19 pandemic.

“We didn’t advertise it at the time,” he said.

Since then, he said the merry-go-round, which is compliant with the Americans with Disabilities Act, holds a wheelchair in place through centrifugal force, has been getting regular use through the summer.

Gaskin said, about two years ago, the village invested $75,000 into the park for a new section of playground, which made it more friendly to those with this abilities.

“This is a continuing effort and one more step toward making it so it includes everyone,” he said.

STEM+M to started remote learning on Monday Lawrence County schools are set to return to in-person on Aug. 24, though... read more