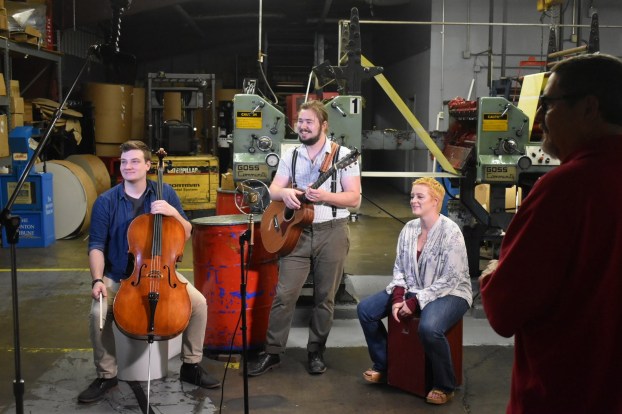 Location: We originated in Huntington, WV at Marshall University, and each of us are from the surrounding area nearby

How did the project start? Schumann and I (Zac) met in our freshman music theory class in Marshall’s music program. We quickly bonded over fart jokes. Cierra had seen us around and spoken to us in passing, and eventually joined us in a practice room where we were jamming out instead of practicing our assigned music. Clearly she just wanted another excuse to talk to me…

What are three adjectives to describe your style? Genuine, organic, and eclectic

Walk us through your creative process. Does it vary, if so, how? This question is a bit tougher, as Cierra and I seem to have differing approaches to writing songs. My music comes only through a spark of inspiration. I struggle greatly when I decide to just sit down and try to pump out a song. When I write music, it seems more like discovering the song than writing it. Cierra, on the other hand, is some kind of songwriting goddess. While she can draw straight from the heart like I do, she can also pump out awesome songs all willy-nilly when we need them. That’s not to say they’re not heartfelt and genuine as well, but she can immediately call on that inspiration. Schumann just makes pretty notes I guess.

How has your art evolved since you started? I would say our musicality has evolved both inward and outward. Outwardly, as our original song library has grown, the songs have not only grown in number, but also in diversity. Each song feels a little harder to put into a genre than the last, and I hope that continues. Inwardly, we have begun to meld together as a band through our time playing together. We all come from worship music backgrounds, so that has helped us understand the ebb and flow we often accomplish together in our songs, but beyond that, we have learned the playing style of one another to such a degree that we can move gracefully through new music or smooth out the unexpected hiccups that are unavoidable when performing live music. I expect that in a few years, we may just become some sort of disgusting, single-musician conglomerate monster.

What is your favorite creative tool, and why? Personally, my favorite creative tool is life. As I said, I create my music exclusively through inspiration which only comes from the ups and downs of living. Outside of that, quiet and alone time are essential for my music writing process.
Cierra’s favorite creative tool is tequila. Okay, maybe not tequila. But also, maybe not not tequila.
In all seriousness, Cierra enjoys drawing from the energy and experiences of those close to her. She enjoys taking these experiences, painting them in poetry, and setting them to a score. This allows her and those around her to immortalize the memories and joy those close to her have brought into her life. A musical snapshot of the ones she loves. I think Schumann sits in the dark and listens to Russian symphonies or something. Idk.

What about being an artist fills your cup? Why should others take interest in the arts? Our joy in music, first and foremost, comes from sharing the story of Christ and the impact He has had on each of our lives. He is the reason we are able to sing and the reason we will keep singing. Outside of that, I believe music speaks to people on a more intimate level than any other artform. I know it does for me personally, at least. There is a quote by H.C. Andersen that has always stuck with me: “When words fail, music speaks.” Sharing my own music as a songwriter is a bit like letting someone read out of a personal journal which makes it a bit terrifying to share new songs but also a bit exhilarating. The songs Cierra and I write are straight from the heart, so when you hear them, you are hearing a piece of ourselves. If our songs resonate with you, it’s probably because we have felt something very similar, and you’re not alone in whatever you’re going through, whether it’s a positive or negative experience. I think that’s a beautiful thing, and it’s worth doing over and over again.

Any advice for new or struggling artists? Cierra says her advice for a new or struggling artist is the same as her advice for anyone. It is also the same advice I would give: keep on keeping on. If you’re afraid to share with others, that’s okay. You can share when you’re ready – but know that sharing will help you. You also have no idea how your sharing your music with the world could help another person. As much as we like to think, all of us are not all that unique. We share the common struggle that is the human condition. Sure, it comes in many names and forms, but at the heart, we are all tackling this life thing together. If you’re struggling to write, keep writing. You will write so many bad songs, but you will grow and get better. It’s a process. If you’re not enjoying what you’re doing anymore, maybe it’s time to reexamine and get back to the basics. Why did you love it in the first place? It might be time to shed the extra hubbub and get back to what made you fall in love with music or whatever other art you’re creating. It shouldn’t be a chore. Sure, sometimes we all have to do that boring stuff we don’t like, but it shouldn’t always be chore. Schumann would probably just recommend locking yourself away in your wine cellar and studying a Bach cello suite for a few days.

What upcoming project should we look for, and where can we look for it? We’re actually going to be on this really cool new TV program called Press Room Recordings. Just kidding. I mean we are, but you know that. You should definitely be on the lookout for our album release. We haven’t set a date for it yet, but we have some really cool music in the works that should be coming out in the not-so-distant future. Keep an eye on our social media pages (the main one we use is our Facebook page titled “Cypress Band”). We have some simple, homegrown music videos in the works. They’re nothing super special, but they’ll really get at our WV roots. If you want to see us anywhere else, feel free to reach out to us with recommendations on where you’d like to see us play, or better yet, play band manager and show us to the scouts at your favorite local venue. I’m not desperate, you’re desperate!

What question do you never get asked that you would like to be asked? How would you answer? Cierra has always wanted to walk up and accept her Oscar award only to be asked, “Oh my gosh, Cierra! You look stunning this evening. You must tell us what you’re wearing!” to which she would reply, “I found this beauty at Goodwill. 3 dollars, and I only had to sew up two holes.” I’d like to be asked which band or artist I dream of opening for. My top bands and artists I dream of opening for are, in alphabetical order, Ed Sheeran, Kings Kaleidoscope, Mumford and Sons, Passenger, Relient K, Rend Collective, and Switchfoot.

Zac Doss is the lead singer and songwriter for Cypress. Zac studies Vocal Performance, English Education, and English at Marshall University. Zac’s style is reminiscent of many singer-songwriters such as Vance Joy, and Ed Sheeran, while adding his own unique twist which adds a blend of religious imagery and impressive vocal abilities. A feature sound of Cypress is the tight and beautiful vocal harmonies traded between the husband-and-wife duo in the band that adds a profound depth while simultaneously permanently compelling Steven to the position of “band third wheel.”

Cierra James Doss is a Vocal Performance and Music Education major at Marshall University (class of 2020). With a passion for people and the voice of an ANGEL. Cierra blends the sounds of modern pop, folk, and broadway with the technical prowess and range of a classical soloist all while playing ukulele, cajon and foot percussion for the band.

Steven Schumann is the cellist for the band, adding his own unique take on folk cello techniques, and blending in influences from various artists and composers. Steven has received awards for both his classical performance (Belle and Lynum Jackson Competition, first place, Huntington WV 2019) and session recording (International Songwriting Competition 2018, first place in Country Music). Steven performs and subs in with various bands in the West Virginia area such as Walter Debarr and Render the Hearts.

Cypress’ Press Room Recording kicks off Season Two of the series and will premier 8 p.m. Saturday at https://tinyurl.com/y3ec5d7q and on Armstrong Neighborhood Channel 100.

The following construction projects are anticipated to affect highways in Lawrence County next week. All outlined work is weather permitting.... read more