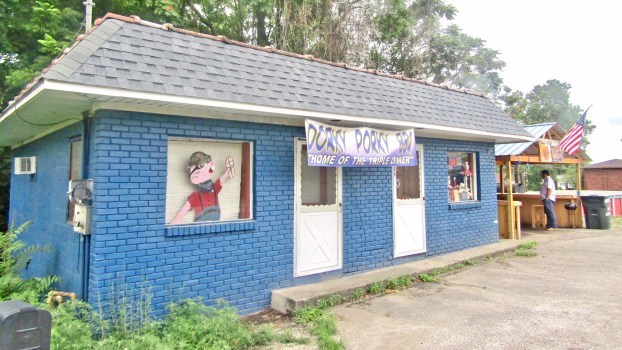 ‘Family affair’ has been operating since January

SOUTH POINT — Dan Stewart, owner of the family business Dorky Porky BBQ, said he started a “roadside set up” at the M&M Inflatables Parking lot on Jan. 13, with just a tent. Now, he has storefront in South Point.

“We found a little home here that we fell in love with and decided to try and make something in South Point,” Stewart said.

Since 2013, for seven years, Stewart competed in competitive BBQ events and sold at fairs and festivals around the Ashland, Kentucky area.

Baby back ribs are the “key thing that everybody loves,” Stewart said. “Pulled pork — we sell a lot of it”.

He said they have had a good reaction to their South Point location, at 106 Fourth St. W.

“Ever since the first day we set up, we’ve had nothing but positive feedback,” Stewart said. “They’ve [South Point residents] welcomed us here with open arms”.

Dorky Porky BBQ offers apple cobblers and cherry cobblers made by Stewart’s wife for $4.75 a piece.

Some other items that they have offered are smoked chicken wings, pulled pork, brisket and bacon-wrapped chicken legs.

Just in the past week, according to their Facebook page, Dorky Porky BBQ sold out of ribs and pastrami on Aug. 3 and sold out of chicken legs on Aug. 5.

Based upon Facebook reviews, the people of South Point and surrounding communities love the smoked BBQ that Dorky Porky BBQ has to offer.

One review said “Dorky Porky has the best BBQ I’ve had in a very long time.”