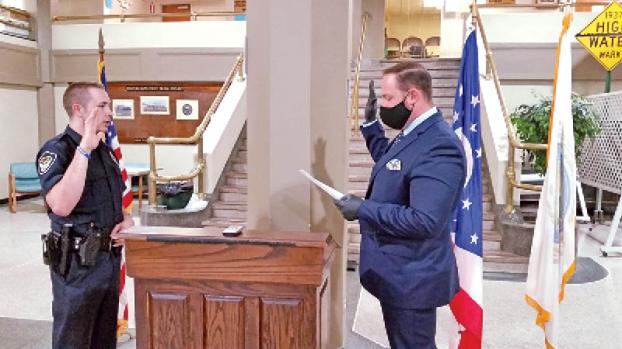 On Thursday, Brandon Blankenship, left, was sworn into the Ironton Police Department by Mayor Sam Cramblit during a socially distanced ceremony in the lobby of the Ironton City Center. (The Ironton Tribune | Mark Shaffer)

On Thursday afternoon, the Ironton Police Department had the latest addition to their police force.

In a ceremony in the lobby of the City Center, Mayor Sam Cramblit swore in Brandon Blankenship.

He graduated from Ironton High School in 2014.

Blankenship said he considered being a police officer when he was young.

“It was always in the back of my mind growing up, but I kind of got out of it as I got older,” he said. But after losing a job as a plant supervisor, he decided to go into law enforcement. “I went to the academy and never looked back.”

He went to police academy at Scioto County Career Technical Center in Lucasville and after graduating in 2019, he got a job with the New Boston Police Department.

“I wouldn’t change my career now,” Blanxkenship said, adding he was happy to be part of his hometown police force. “This was my ultimate goal, to get back here. I’m really excited, really happy. This is what I wanted.”

IPD Chief Pam Wagner said they were pleased to have Blankenship in the department.

“We’re happy to have him on the team and expect great things from him,” she said. “We know that he is a young officer and brings a lot of energy to the job. He does have some experience.”

He will spend the next several weeks with a field training officer before patrolling on his own on the night shift.

The IPD has been understaffed since two officers, Sgt. Jamie Pruitt and Captain Chris Bowman, retired within a week of each other in June.

“It’s a hard time to be a police officer,” Wagner said. “But we are greatly blessed, we have a great city and a great community that is very supportive of us. So, we are looking forward to building our department and moving forward.”

Including everyone — New South Point merry-go-round is handicapped-accessible

SOUTH POINT — A new piece of playground equipment was installed earlier this year in the village of South Point’s... read more