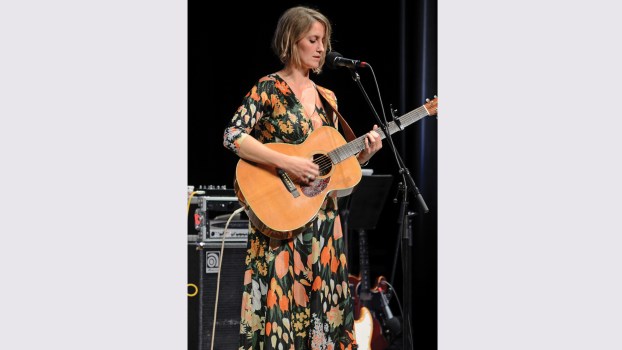 Joan Shelley performs at Mountain Stage in Charleston in 2017. Shelley is one of the artists who will take part in a virtual event by the Nelsonville Music Festival from Aug. 21-22. (The Ironton Tribune | Heath Harrison)

NELSONVILLE — Although the Nelsonville Music Festival was canceled in person, a virtual version featuring a number of popular artists will take place on the music festival’s YouTube account.

The performances will take place over the course of two evenings on Aug. 21 and 22. The event will act as a fundraiser to both the Nelsonville Music Festival and Stuart’s Opera House, both performance-based organizations who have lost funds due to canceled performances during the pandemic. The performances are free to watch, but a donation is encouraged.

A number of popular bands’ performances will be featured, including CAAMP, Mandolin Orange, Hot Tuna, Joan Shelley and many more.

Bands that would have traveled in from around the country were able to record their performances wherever they currently were located and submit them for the compilation of performances.

The artists who are from the region were recorded in unique locations in the Athens-Nelsonville area by a group of Ohio University staff, faculty and students, an effort greatly coordinated by Josh Antonuccio, the director of the Ohio University School of Arts and Media Studies.

“A few things kind of converged for me — one is just how important the festival is for just the region and how great of a collection of artists it is,” Antonuccio said. “On our side, we had a number of … seniors that had graduated, and then upperclass people that had lost confirmed jobs and/or internships and so on kind of trying to think about how to create a large summer initiative where we can hire graduates in and … mostly juniors and seniors to work on a large-scale project.”

Antonuccio is no stranger to the Nelsonville Music Festival, having produced and directed the Gladden House Sessions, for which he and three employees of the PBS affiliate WOUB, have been nominated for an Ohio Valley Regional Emmy award.

Safety precautions have been taken for filming, Antonuccio said, with film crews being at least twice the recommended distance from performers while they are signing. Hand sanitizer around the project is plentiful, Antonuccio said.

By THE CENTER SQUARE COLUMBUS — Schools in Ohio are planning to employ a mix of in-person, at-home and hybrid... read more