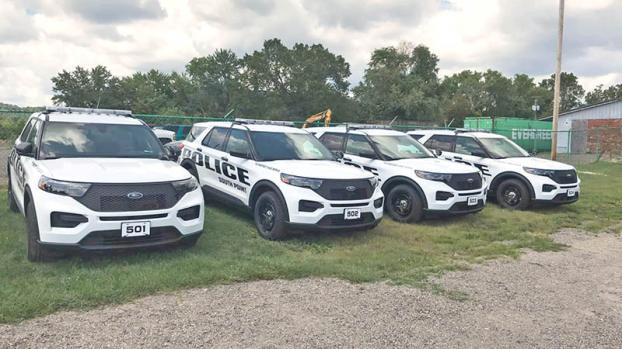 SOUTH POINT — On Wednesday, the village of South Point received four new police cruisers, which Mayor Jeff Gaskin said are the first new vehicles for the department in his memory.

“For many, many years the SPPD has purchased used, very used State Highway Patrol cruisers and worked to keep them running,” he said in a Facebook post. “I cannot remember if SPPD ever had new cars.”

The new cars are a three-year lease to the village and Gaskin said, at the end of that period, the village will buy the vehicles, which are dealer-maintained, for $1 each.

He said everything, including the wiring for the radio and the siren, are under warranty.

“We could not justify buying used, worn out cruisers anymore,” he told The Tribune.

Gaskin said on Facebook that, two years ago, he encouraged the department to institute an impound lot.

“To date, we have sold many cars that were towed for many reasons, or seized for drug activity,” he wrote. “These funds pay the major portion of the lease of these four new, dealer prepped cruisers. They come ready with everything except the computers.”

He said he proud to work out the lease of the new cruisers for officers.

“When you see them out, take a look, the officers are proud as new parents,” he wrote. “Please remember that although we write tickets, tickets alone do not finance the police dept. The large majority of their budget comes from the general fund and our police levy.”

Blankenship previously worked for New Boston PD On Thursday afternoon, the Ironton Police Department had the latest addition to their... read more