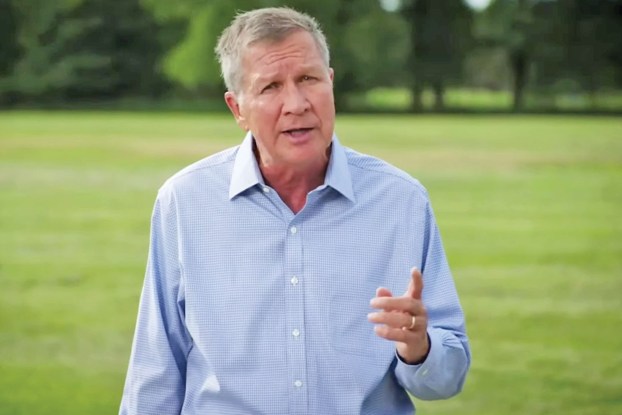 Former Ohio Gov. John Kasich speaks remotely to the opening night of the Democratic National Convention on Monday. Kasich, a Republican, said he was breaking with his party and endorsed former Vice President Joe Biden for president. (Screengrab)

Kasich, a lifelong Republican, appeared in a prerecorded video for the first night of the convention, which was originally scheduled for Milwaukee, Wisconsin, but took place virtually, due to the COVID-19 pandemic.

He was preceded by fellow Republicans who have announced their support of Biden, former U.S. Rep. Susan Molinari, of New York, Quibi CEO Meg Whitman, who was her party’s nomine for governor of California in 2010, and former New Jersey Gov. Christine Todd Whitman, who served as head of the U.S. Environmental Protection Agency under President George W. Bush.

Kasich stood at an unpaved, rural crossroads in the video, a metaphor he invoked in his message.

“America is at a crossroads,” Kasich said. “Sometimes, elections represent a real choice — a choice we make as individuals and as a nation about which path we want to take when we’ve come to challenging times. America is at that crossroads today. The stakes in this election are greater than any in modern times.”

Kasich said he and many others are “deeply concerned” about the path the U.S. is on under Trump.

“It’s a path that’s led to division, dysfunction, irresponsibility and growing vitriol between our citizens,” he said. “Continuing to follow that path will have terrible consequences for America’s soul, because we’re being taken down the wrong road by a president who has pitted one against the other.”

Kasich said he was “a lifelong Republican,” but that takes “second place to my responsibility to my country.”

“That’s why I’ve chosen to appear at this convention,” he said. “In normal times, something like this would probably never happen, but these are not normal times.”

Kasich said he has known Biden for 30 years and knew “his story of profound grief that has so deeply affected his character.”

“I know Joe is a good man, a man of faith, a unifier, someone who understands the hopes and dreams of the common man and the common woman, a man who can help us to see the humanity in each other,” Kasich said. “He knows that the path to a restored and rejuvenated America lies in respect and unity and a common purpose for everyone.”

Kasich ran unsuccessfully for his party’s nomination for president in 2016, winning his home state and no others. He refused to endorse Trump in the fall and has remained one of his most prominent Republican critics.

Trump attacked Kasich on Monday ahead of the speech.

Contrary to Trump’s claim, Kasich did not announce a party switch and said he was “proud of my Republican heritage,” describing it as “the party of Lincoln.”

“But what I have witnessed these past four years belies those principles,” he said in his speech.

Kasich, who served three terms in Congress, was elected governor of Ohio in 2010. He served two terms and was constitutionally limited from running again in 2018. He was succeeded by Republican Mike DeWine in the office.

Biden, who will be taking part in a fundraising event with actor Tom Hanks on Tuesday, will formally accept his party’s nomination from the Chase Center in Wilmington, Delaware on Thursday night.

Republicans will also be hosting their convention virtually next week, after canceling plans to host a traditional event, first in Charlotte, North Carolina and then Jacksonville, Florida. Trump will accept his party’s nomination for a second term from the White House lawn on Thursday, Aug. 27.

DeWine: Face shields not a substitute for masks