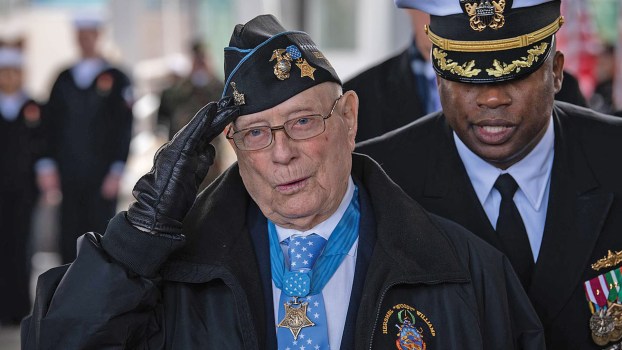 Hershel Woodrow Williams, Retired Chief Warrant Officer Four and Medal of Honor recipient, salutes as he is introduced to the stage along with other members of the ship commissioning committee, March 7, 2020 in Norfolk, VA...The ship commissioning ceremony continues a tradition three centuries old, observed by navies around the world and by our own Navy since December 1775, when “Alfred”, the first ship of the Continental Navy, was commissioned at Philadelphia. (U.S. Marine Corps Photo by Lance Cpl. Fernando Moreno)

DeWine joins effort to honor Williams with Medal of Freedom

COLUMBUS — Ohio Gov. Mike DeWine said on Friday that he is requesting that Hershel “Woody” Williams be considered for the Presidential Medal of Freedom.

Williams, 96, of Ona, West Virginia is a Marine veteran of World War II and received the Medal of Honor in 1945 for his actions during the Battle of Iwo Jima.

Williams is the only living Marine veteran from the conflict who is a Medal of Honor recipient and the last surviving recipient from the war’s Pacific Theater.

“As the governor of Ohio and the son of a World War II veteran, I would like to join the chorus of voice requesting the consideration of Hershel “Woody” Williams, Medal of Honor, CW04 USMC (ret.), for the Presidential Medal of Freedom,” DeWine wrote in his letter to President Donald Trump, dated Aug. 10.

DeWine cited Williams’ continuing “commitment to country,” and his work with the Woody Williams Medal of Honor Foundation to establish memorials for Gold Star Families throughout the country, as well as to provide scholarship to Gold Star children of those who lost those lives in service.

The movement to honor Williams with the Medal of Freedom began when his home state U.S. senators, Democrat Joe Manchin and Republican Shelley Moore Capito, made the request, followed by the state’s U.S. representatives.

Williams was asked about the movement when he was interviewed for The Tribune’s special issue on the 75th anniversary of the end of World War II.

“I am enthralled others would do that sort of thing for this old country boy from West Virginia,” he said. “I am extremely grateful they even think I am worthy. It would be far beyond anything I ever dreamed of.”