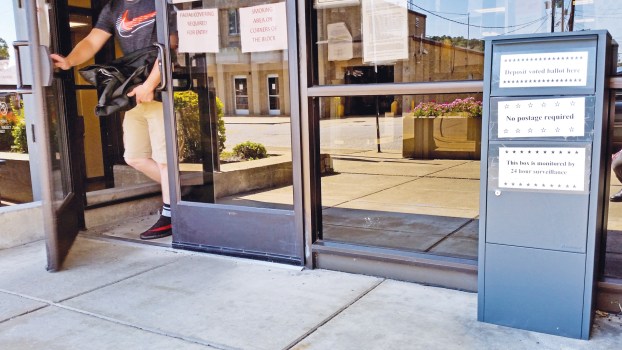 A drop box for ballots is located outside the Fifth Street entrance of the Lawrence County Courthouse in Ironton. Ballots will begin to be mailed out on Oct. 5. (The Ironton Tribune | Mark Shaffer)

Ohio has election safeguards in place for mail-in votes

There has been a lot of controversy and misinformation about mail-in ballots, polling places and the upcoming presidential election.

As it stands now, all 32 polling locations will be open in Lawrence County.

As boards of election found out in the primary in the spring, it could all change, even as late as the night before.

The board had prepared sanitary precautions and followed CDC guidelines for the March 17 election, but Gov. Mike DeWine announced that the election would be postponed due to a fear of spreading the virus among poll workers and voters. A judge in Franklin County said that the governor didn’t have the authority to do that. That all changed again when Ohio Health director Dr. Amy Acton declared a health emergency and shut down the polling places across the state.

It wasn’t until 11 p.m. that the board of elections got the directive.

So, instead of setting up the polling places on March 17, crews had to bring the voting equipment back and put it in storage until June 2.

“It was frustrating. We jumped through a lot of hoops and spent a lot of money because it takes a lot to get all the equipment and get it deployed,” Snider said. “It changed multiple times that evening, right up until 11 p.m. This time, I can’t imagine that we are not going to the polls. But then, I didn’t imagine that in March.”

One big concern on social media is that is that it is easy to commit voter fraud, that all someone has to do is just mail in a piece of paper and it gets counted as a legitimate vote.

When asked about it, Snider just laughed and said “no.”

In reality, Ohio has had mail-in voting for over two decades and there are a lot of steps and safeguards to prevent voter fraud.

All ballots are cross referenced with the list of registered voters and then stored in a vault until it is time to be counted.

As long as legitimate mail-in ballots have a postmark that is Nov. 2 or earlier, the vote is counted.

And if someone doesn’t trust the mail to get their ballot to the board of elections on time, they can put it in a drop box located by the Fifth Street entrance of the courthouse.

She said that, once the ballots are distributed, two workers, one Democrat and one Republican, go out and collect ballots from the box several times a day.

The ballots are then taken to the application room and then are checked with the voter’s application to again to make sure the ballot ID is matched up and if it does, then the envelope gets a second check mark to show that it is cleared to be counted.

The ballot is put into a tub and then stored in a vault until it is time to be counted on a tabulator.

All through the steps, there is a someone from both parties doing the work.

“It is always double checked by both parties,” Snider said, adding that neither side really looks at the ballot to see how someone is voting.

After the election, the board of election has 19 days to do the official count.

When it comes to time to tabulate, the envelopes are put upside down so the address and person’s name can’t be seen.

In the presence of people from both parties, the ballots are taken out of the envelope and put face down and then taken back to be counted. After they are tabulated, the machines memory stick is taken to another machine that puts out the officials results.

And after that, the ballots all go back into the tub.

And as for somebody just printing off a ballot and dropping it in the drop box, it wouldn’t pass a visual test.

“They would have to have the specific paper that we use and it has timing marks on it, so there is no way that can recreate it or make a copy,” Snider said. “They just can’t do it.”

And some people confuse an application to vote as a ballot.

“We get that a lot,” she said. “We spend a lot of time on the phone explainging that. We get people saying ‘I got my ballot.’ No, you got an application.”

The State of Ohio requires voters to request an application to vote by mail or drop box. The applications are checked against the list of registered voters.

The first day of in-person voting at the board office or ballots are allowed to be mailed out is Oct. 5.

“We already have over 1,000 applications,” Snider said, adding that is other years they only have 400-500 applications by mid-August waiting to be put in the system. “And they haven’t even done the state mailing yet, that goes out in the first week of September.”

There are around 4,500 registered voters in Lawrence County.