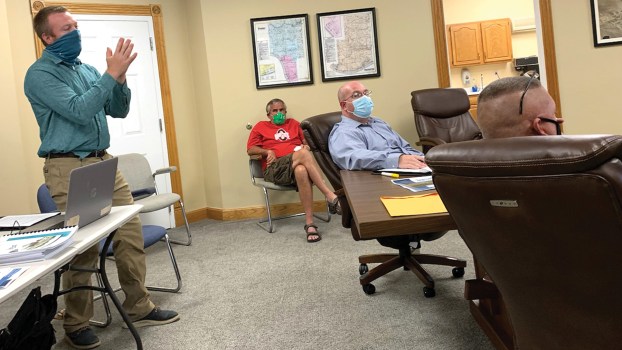 SOUTH POINT — The South Point village council met in special session on Tuesday, where they heard a presentation on a water rate analysis commissioned by the village.

The study, put together by the nonprofit Rural Community Assistance Program, was requested after village administrator Russ McDonald had raised concerns that water usage in the village was too high and was not sustainable.

He said reserves are being used up in a 24-hour period and that the village uses from around 600-800 gallons per minute.

South Point currently has unmetered water and the mayor and council members said that the fact there is no cost has led to abuse of the system, with residents not conserving water.

Council member Chris Smith spoke of one house he knew of that had a foot of water in the basement from a leak, which the owner simply let drain out.

“These people didn’t realize what they had”, Smith said.

While Mayor Jeff Gaskin said he has seen people use sprinklers to water their roofs and cool their houses. He also shared other anecdotes about waste.

“We are no being good stewards of our system,” Gaskin said.

Ben Howard, of RCAP, said that, while the village has been diligent with repairing leaks to mains, installing meters would lead to the detection of leaks in lines leading to homes that many may have been previously unaware of.

“This gets everyone on the same team and their interests are aligned,” he said of establishing a pay-what-you-use dynamic. “It spurs the homeowner to reduce leaks. Without meters, there are no good means to address service leaks.”

McDonald said he is confident there are no main leaks, as the village has a closed system and has constant pressure.

“As soon as I see pressure drop, I know there’s a leak,” he said.

“We are not being good stewards of our system,” Mayor Jeff Gaskin said.

He said the village has had to turn businesses, such as a fish hatchery, away, who wanted to move to the area, as they could not meet water needs under the current system.

Howard said South Point is one of the few communities of its size in Ohio who do not use meters, and said that this could lead to difficulties in getting grants and assistance for capitol projects.

The village has sought to replace its aging water system, which dates back to the 1950s.

“We’ve been kicking the can on this for 30 years,” Gaskin said of the overdue need.

Howard said the revenue collected from addressing leaks and conserving water can be used for other expenses.

“Will some pay more?” he asked “yes. But some won’t and they will figure it out along the way.”

Tuesday’s meeting was intended purely as an informational session and no action was taken.

Gaskin said water meters would not be installed in the immediate future, but it is time for the council to explore options.