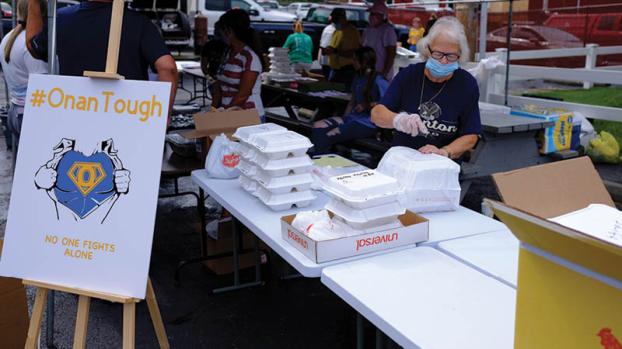 The company and some 75 volunteers set up in their parking lot to sell pulled pork meals as a fundraiser for two-and-a-half-year-old Onan James, who was diagnosed with a cancer called Rhabdomyoscarcoma in a tumor behind his eye, in the nasal cavity. He had his his first chemotherapy treatment on last week.

Onan is a Hebrew word for strength or power.

The boy has been going to Nationwide Children’s Hospital for diagnosis and treatment and things like bone marrow biopsy, lumbar puncture and his port placement.

He said people flocked to the event and many businesses had ordered meals.
“I’ve never seen people come together like this,” Patterson said.

He said the goal was to raise at least $5,000 and to have people help support Onan.
“Everybody needs to pray for this little fella,” Patterson said.
This event was one of the fundraisers being done by local businesses to raise funds for treatment.

Hutchison Farm & Kitchen is doing a cookie fundraiser for Onan and will be selling a dozen cookies for $13. The sale is until Sept. 3.

On Monday, the Coal Grove Freezette gave 20 percent of their sales to help Onan.

For more information about what local businesses are doing to help raise funds for Onan or to give the boy good wishes, go to OnanTough on Facebook.

Ironton Elementary opens back up to different style of schooling

On Monday, Ironton school students returned to classes, facing a different situation than when they abruptly went to remote learning... read more