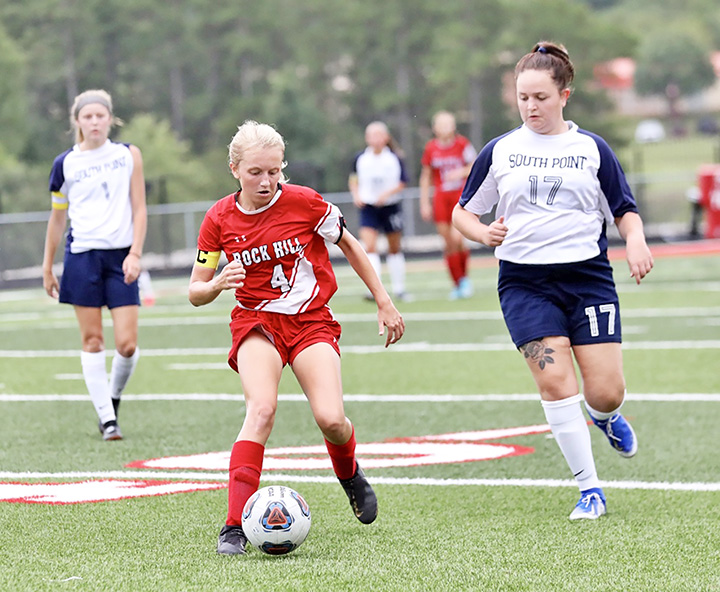 PEDRO — Now this is how you get off on the right foot.
The Rock Hill Redwomen not only played their first soccer game of the season on Thursday, but also their first Ohio Valley Conference game and got their first shutout as they blanked the South Point Lady Pointers 4-0.
“This was our first game and a conference game so it was nice to get a win,” said Rock Hill coach Summer Collins. “Our defense played well to be able to get the shutout against a talented team like South Point. Their girls always play hard.”
Emmi Stevens and Ellen Heaberlin led the way for the Redwomen with two goals and an assist each. Goalkeeper Aleigha Matney turned away eight shots.
Stevens scored the first goal with an assist from Heaberlin as Rock Hill took a 1-0 lead just before the half.
Stevens scored again to start the second half.
Heaberlin then took over with her first goal to make it 3-0 and she scored again with an assist from Stevens and it was 4-0.
Whitney McKenzie had 15 saves for South Point, now 0-1-1.
South Point 0 0 = 0
Rock Hill 1 3 = 4
First Half
RH – Emmi Stevens goal (assist Ellen Heaberlin)
Second Half
RH – Emmi Stevens goal (unassisted)
RH – Ellen Heaberlin goal (unassisted)
RH – Ellen Heaberlin goal (assist Emmi Stevens)
Save-SP: Whitney McKenzie 15; RH: Aleigha Matney 8.