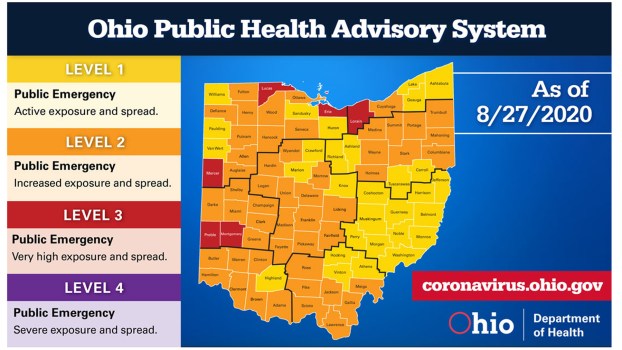 COLUMBUS — The latest update in Ohio’s COVID-19 alert map on Thursday showed the lowest number of Red Level Three counties since its inception.

Only one county, Montgomery, had increased to Level Three on the four-tier alerts system, while five, Erie, Lorain, Lucas, Mercer and Preble counties, continued at that level.

No counties were listed at Purple Level Four, the highest designation.

Four counties, Clark, Clermont, Franklin and Trumball, had decreased to Orange Level Two, which the majority of the state’s counties were listed at.

“The big story this week is that we have 76 counties at the same alert level, which is the smallest movement between levels we have experienced,” DeWine said at his news conference on Thursday of the Level Two designation.

Though there were overall signs of improvement, the governor said the state must remain vigilant as the academic year begins.

“We will be keeping a very close eye on all of our counties as college and university students return to class and as students go back to school,” DeWine said.

On the issue of schools, DeWine said he was issuing an order requiring them to establish a reporting mechanism to parents of COVID-19 cases.

DeWine said the data would be posted every Wednesday on the state’s COVID-19 website at ohio.coronavirus.gov.

“Prompt reporting will help prevent potential further spread among students and staff,” DeWine said. “But remember: just because there is a case at a school, it doesn’t mean the school has done anything wrong. The spread you see in the community will be reflected in the schools.”

Students at Ironton city schools and Ironton Catholic schools returned to in-person classes earlier this week. All other districts are set to resume in-person on Monday, except Chesapeake, which will stay remote for the first nine weeks of the year.

CHESAPEAKE — Five fire departments from the Tri-State received an $823,000 grant from the Federal Emergency Management Agency for the... read more