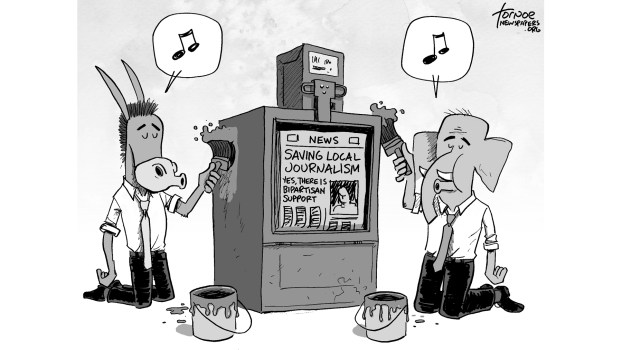 Dean Ridings: Saving local journalism is a bipartisan cause

In a presidential election year and in the midst of the dual crises of the coronavirus pandemic and widespread economic misery, the divisions among Americans can seem to easily overwhelm the bonds that unite us.

That’s why it’s so heartening to see in recent weeks that Americans of all persuasions, and their political leaders on both sides of the aisle, are coalescing around a cause for a community pillar with a history of helping this nation navigate past buffeting winds of turmoil: Saving local journalism.

And make no mistake, local journalism — primarily the newspaper that brings news of its community from high school sports to mayoral campaigns — needs saving. Even before the pandemic lockdowns and before shuttering Main Street businesses sent advertising revenue off a cliff, local newspapers were operating on a financial knife edge. They are being whipsawed by Big Tech companies like Facebook and Google that suck up nearly all available ad dollars while paying no or minimal compensation for the local journalism content they display on platforms.

A joint survey of 20,000 Americans, which was conducted by Gallup and the Knight Foundation just before the pandemic unleashed its wrath upon the nation, found Americans understand very well the consequences of civic life without robust local journalism.

The vast majority of Americans, more than eight in 10, say — in general — that the news media is “critical” or “very important” to democracy. More Americans report they are following local news closely. A follow-up question shows that these citizens are more likely to vote and to feel attached to their communities.

Most encouragingly, Americans still see the news media as part of the solution and not the problem: Nearly half, 49 percent, say the media could do “a great deal” to heal political divisions, while another 35 percent say journalism could contribute a “moderate amount” of healing.

Perhaps the best example of this growing recognition of the importance of local journalism — and the urgent need to support it in a time of its own crisis — is the bipartisan response to an important piece of legislation introduced this summer by U.S. Representatives Ann Kirkpatrick, a Democrat from Arizona, and Dan Newhouse, a Republican from Washington state.

The Local Journalism Sustainability Act has attracted 49 cosponsors as of Aug. 26. These Congressional representatives range all over the supposedly immutable political divide — from liberal representatives, including Democrats Eleanor Holmes Norton of Washington, D.C., to conservative Republican Vern Buchanan of Florida.

There’s a lot to like about the Local Journalism Sustainability Act, which will cost taxpayers nothing while helping the three stakeholders of trusted, fair and accurate journalism: People who subscribe to newspapers or other local media; businesses that advertise in local newspapers; and newspapers that staff their newsrooms with journalists who cover the community.

The legislation provides a sun-setting five years of tax credits for subscriptions, advertising and newsroom payrolls.

Whether or not this legislation passes in this election-shortened Congressional session, it still stands as a way forward for bipartisan action on a crisis that affects not just newspapers, but all elements of a thriving community. That’s why, if you don’t see your Congressional representative in this list of cosponsors for H.R. 7640, please consider asking him or her to be part of the solution that safeguards your access to local news and information.

There is plenty of precedence for supporting journalism on all sides of the partisan divide. Consider Vice President Mike Pence, surely among the president’s most fervent supporters. During his 12 years in Congress, he repeatedly introduced legislation for a federal so-called shield law to protect the sources of journalists reporting on issues important to the American people.

“This isn’t about protecting reporters,” Pence said in 2005 to the Inland Press Association, one of the two associations that merged to become America’s Newspapers. “This is about protecting the peoples’ right to know.”

Those words and that sentiment could refer right now to the Local Journalism Sustainability Act. Your right to know — your access to accurate and fair local news — transcends any partisan divide.

— On behalf of its approximately 1,500 newspaper and associate member companies, America’s Newspapers is committed to explaining, defending and advancing the vital role of newspapers in democracy and civil life. We put an emphasis on educating the public on all the ways newspapers contribute to building a community identity and the success of local businesses. Learn more: www.newspapers.org

With the political conventions now over and Labor Day approaching, the general election campaign is about to kick into high... read more